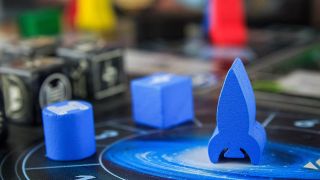 While we all love playing board games with our friends and family, sometimes that just isn't possible. There are a lot of games out there that can be played by one player and beyond, so you don't have to buy games just for you.

We've forced ourselves to play loads of awesome games on our own to bring you the very best ones we could find. Just kidding it was loads of fun. Our jobs are awesome.

Castle Panic is one of those board games that are so much like a video game it can lure people into playing. Based on the tower defense games you see on smartphones the idea is to defend your castle while it gets attacked by trolls.

Castle Panic is a 1-5 player cooperative game and the single-player rules are pretty much the same as the standard.

There is an entire group of games out there that are narrative in style but don't require an active narrator to play. On most occasions either the player themselves rolls for the bad guys, or the monsters have a predetermined attack pattern that happens after the good guy goes.

Mice and mystic is one such game where you can move your little warrior mouse around the storyboard and fight monsters without needing anybody else. It is endlessly replayable too with story arcs and fun narrative hooks for you to play through.

No price information
Check Amazon
See all prices (1 found)
The Old Ones are coming!

Arkham Horror feels like it should be a simple card game, but it has complex mysteries to solve at every turn. This game is specifically built for one to two players as well, so you won't ever feel like you are underpowered for the fight that is to come.

Of course, that fight is against the Great Old Ones so you are already underpowered.

What's that coming out of the wall?

This is one of those amazing games that blur the line between role-playing games and board games. Made by the creators of Dungeons and Dragons this game is designed to offer all the tactics and fun of D&D, this game is a huge box full of hours of fun.

Mad Mage uses the d20 dice system, and the monsters play themselves depending on what it says on their card, so you can happily play on your own, creating epic battles without a hitch.

As the 2015 "solo game of the year" award can attest, Tiny Epic Galaxies is a brilliant single-player game. Made by Kickstarter legends Gamelyn Games, the Tiny Epic series has hours of game play for one to five players.

Galaxies is built around a set of cards predefined conditions attached. Your choice makes those conditions either positive or negative. Because choice is the deciding factor the replayability is endless.

Mansions of Madness is an enormous game. The box is massive and full of beautiful tiles, detailed pieces, and books of story that allow for an almost unlimited number of playthroughs. Mansions also come with an app that takes you through the game so it's very easy to play solo as the app makes a lot of the decisions for the baddies.

Beware, it's another story of the Great Old Ones, so it is heavily themed around sanity so if that isn't your thing you might not enjoy it.

Playing solo is better than not playing at all

Not being able to play board games with your friends sucks. We all know it, but just because we can't play with friends doesn't mean we should lose our edge. All of these games are available for one player and up, meaning you can play this solo until you are able to kick butt in a group.

If you are looking for some light-hearted fun to start off your solo adventure then Castle Panic is for you. It's a  brilliant game to play in a group, but solo adds a whole new level of difficulty and panic.

If you want to get deep into a game, with a huge amount of choice and narrative, try Mansions of Madness. You will find it intense, and difficult, and very, very awesome. The Mythos gives you a lot of chances to play solo. Whether you play Mansions or Arkham Horror, it's clear the Old Ones want you to fight on your own!