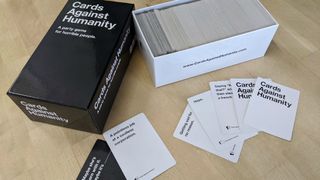 Cards Against Humanity is a hugely popular party game for adults. The original pack is amazing on its own but the CAH team is never one to rest on its laurels. They have been turning out some amazing expansion packs for ages.

These expansion packs are normally cheap, and small — normally only 30 cards — and are designed to supplement the original box. If you are thinking of buying a lot of packs, and you should because they are brilliant, then you should also pick up the creatively named Bigger, Blacker Box. It allows you to keep all your cards in one safe box. Be warned though, isn't actually blacker!

A pack of packs

The Red Box houses the first six big expansions for Cards Against Humanity and saves you from having to buy them separately. This box includes 300 cards, which amounts to 10 of the new style of packs, so it's well worth picking up.

It also comes in a full box instead of just foil, so there is more room to store cards safely.

It's as good/bad as you imagine

This is something a little different than the normal packs. It still has 30 cards like the other packs but this one was written by users in the Cards Against Humanity Reedit thread.

As you can imagine CAH had to use the ones they could — some of them were not ok to make — but the ones they did publish are funny and rude, or a mixture of both.

Reliving the '90s is the best use of your time.

We all know the 1990s was the best decade to live in and anyone who says otherwise didn't live in them. We had the best music and the best TV. We even combined the two and had MTV, and it was rad!

This pack has brilliant references to Kelly Kapowski, Kurt Cobain, and Capri Sun, making it the de facto best pack ever. If you feel any different you are wrong and can eat my shorts man. Cowabunga!

To be or not to be

This pack is for the more discerning and cultured among you. It features thought-provoking quotes from Descarte, musings from Keates, and deep dives into the works of Freud, and Socrates.

I kid, this pack is actually about the things you really do at college; Drinking, being sick, and other activities that young people with no guidance tend to do.

This pack is as wide ranging as geek culture

While researching this article I fell in love with the cards from the geek pack. Some of them are a little different than the norm, which makes it well worth picking up.

This is the cleverest pack so far

What makes this pack work so well is that a lot of the cards aren't inherently fun. But scientific jargon tends to be very funny when taking out of context, so they work better when mixed in with the regular cards.

With so many more people staying home it's important to be able to let your hair down and have some fun with the other grown-ups in your house. Cards Against Humanity offers a quick and easy way to laugh until you pee a little, and because of that, it's worth its weight in gold.

My personal favorite of all these packs is the '90s one. It reminds me of a simpler time when I was young and stupid, instead of now, when I'm old and stupid. I also really like the geek pack because of my massive amounts of geekitude.

None of these packs are particularly expensive so if you can, it's worth picking up one or two at a time to flesh out your collection.