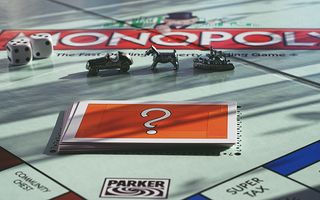 Disney freaks, raise your hand! I freely admit that I fall into this category, which is why Monopoly's Disney Animation Edition is my Monopoly of choice. From specialized Disney game tokens to movie-themed properties, this game is an adventure that meanders through 80 years of Disney magic.

Who can get away with it?

This is the perfect Monopoly game for that certain family member that always tries to bend the rules (every family has one!). The whole point of this game is to try and cheat your way through - without getting caught! For those who do get caught, a pair of handcuffs is provided to keep them in jail.

For a fast and simple game

Don't have time to play the original Monopoly game? Try out this quick and easy Monopoly card game instead! I'll admit I was skeptical at first, but after a few rounds of Monopoly Deal, I was hooked! This is a fun, simpler version of Monopoly that may end up going on for hours, just because you can't bring yourself to stop playing.

Now here's an interesting twist on Monopoly. The theme takes on the ever-present controversy of socialism versus capitalism. Players can choose to pool their resources and work together, or take an "every man for himself" approach. This version of Monopoly is recommended for adults, and it makes a great party game.

Star Wars fans will totally geek out on this edition of Monopoly. The game play is similar to the original Monopoly, but each game token is a favorite Star Wars character - either rebel or empire. The properties are, of course, made up of planets and bases, and you may be surprised how the force comes to influence your game!

Best for lovers of avocado toast and lattes

OK, millennials, you know who you are. This edition of Monopoly is for you. Since we all know that a good avocado toast is more important than money, this game is all about collecting "experiences" as opposed to cash. This you achieve by visiting cool places and doing hip millennial type stuff. Sound weird? It is, but also loads of fun!

Families with kids will love this new version of Monopoly that involves everyone's favorite two animals - unicorns and llamas! It's a whole new take on Monopoly, where families can team up into groups (either unicorns or llamas, obvi) and duke it out to see which fluffy creature will win. It's sparkly, it's fuzzy, and kids absolutely adore it.

Whether you're a huge Avengers fan or just love superheroes in general, Monopoly Avengers is a fun, heroic take on the beloved game. Instead of collecting properties, players collect famous Avengers characters, even partaking in the occasional battle to see who wins. It's a very fun Monopoly experience for kids, adults, and everything in-between.

There's a Monopoly edition for every type of human on this list. My favorite will always be the Disney Animation edition because it brings 80 years of nostalgia into my favorite childhood game. I mean, who can resist Aladdin's lamp as a game token? There's just no losing when you're playing with Disney characters.

Every person is different of course, so some families may prefer Unicorns vs. Llamas for the dynamic team play. It's definitely a unique take on Monopoly game play and always a hit with the kiddos. For a more adult theme, on the other hand, check out Monopoly's Socialism Edition. This more mature version of Monopoly will bring some very interesting topics into your next adult game night. Choose whatever works for your household, and get playing!