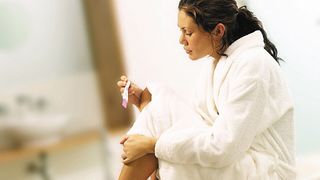 Early signs of pregnancy vary from woman to woman and pregnancy to pregnancy, and rarely will a woman experience all early signs of pregnancy – thank goodness! But there are several common symptoms that most women experience to some degree. These could include a new aversion to your usual morning cuppa, or perhaps your breasts look bigger than normal – and not because you’re wearing a fancy new bra, either. That said, it’s also possible to sail through early pregnancy without any symptoms.

If you are feeling a little off and are wondering if pregnancy is the cause, check out the common signs of pregnancy below to see if any match up with how you’re feeling. Unfortunately, some symptoms of pregnancy can also be symptoms of PMS. Adding to the confusion, there could also be other explanations for a missed period beside pregnancy – the NHS has an online resource listing other possible causes.

How to buy clothes for a newborn: what you need for the first six weeks

Whether you’re experiencing symptoms or not, the best way to find out if you’re pregnant is by taking a test. Before you do that, let’s look at the most common signs of pregnancy to see if any ring true for you...

Has getting out of bed suddenly become harder than a HIIT workout? Tiredness is indicative of many conditions, sure, but it’s also one of the earliest signs of pregnancy. NHS pregnancy guidance states that: ‘Tiredness in the first few weeks of pregnancy could be due to the rising levels of progesterone in your body as it maintains the lining of your womb to help support the pregnancy.’

Low blood pressure and falling levels of blood sugar could also cause fatigue. Experts recommend resting during this period - which could last until your 12th-14th week of pregnancy - and eating a balanced diet rich in protein and iron.

If you’re experiencing unusual fatigue but are a few days out from when your period is due, an advanced pregnancy test might help you discover the truth. These sensitive tests detect pregnancy from up to six days before your missed period (the day after your period is due). Try the Clearblue Early Detection Pregnancy Test (UK), or First Response Early Result Pregnancy Test (US).

Morning sickness can strike at any time of day or night. It usually starts around six weeks after conception (although it can start earlier) and subsides once you enter the second trimester. The exact cause of morning sickness is still unclear, but it’s likely linked to the rapid increase in the pregnancy hormone hCG – the same hormones pregnancy tests are designed to detect. Eating little and often helps ease morning sickness, with women through the generations turning to ginger and mint to ease the queasies. The exception, according to the NHS, is for any woman experiencing regular vomiting: ‘If you're being sick all the time and can't keep anything down, contact your GP. The pregnancy condition hyperemesis gravidarum (HG) is a serious condition that causes severe vomiting and needs treatment.’

Although most people say a missed period is the most reliable sign of pregnancy, it’s not strictly the case unless you have a regular menstrual cycle. If your periods are like clockwork but this month you’re late, then yes it could be an early sign of pregnancy for you. However, you may experience light bleeding or spotting around the time of your period even if you are pregnant (see no 4.) There are many pregnancy tests designed to detect pregnancy once your period is late. Clearblue is a global leader in pregnancy tests and its Digital with Weeks Indicator Pregnancy Test is highly rated.

If your period has changed and it isn’t due to pregnancy, see your GP.

Women can experience spotting or light bleeding during early pregnancy, which could be mistaken for a very light period. This is called implantation bleeding, which WebMD covers in-depth, summing it up as such: ‘If you see light bleeding - small pink or brown spots - in your underwear and you think you might be pregnant, it could be implantation bleeding. That happens 6 to 12 days after conception, and you may mistake it for your regular period.’ The NHS also offers an online guide, explaining the cause of bleeding as ‘…when the foetus plants itself into the wall of your womb. This is also known as implantation bleeding and often occurs around the time your first period after conception would have been due.’

Do you find yourself crying without knowing why? Or is your temper racing from 0 to nuclear in record time? Pregnancy hormones could be to blame. Mood swings during early pregnancy are common, but they’re often short-lived. They’re also another reason to rest, as quality sleep and cat naps will boost your mood. If you are pregnant and finding it difficult to sleep, perhaps try a comfy pregnancy pillow.  If you think pregnancy could be the cause of your mood swings and you’re now getting ready to buy a pregnancy test, take a look at the First Response Pro Digital Pregnancy Test Kit. This app-controlled kit will not only tell you if you’re pregnant, it will (via the app) provide 24/7 pregnancy guidance, including how to maintain your pregnancy wellness, which in turn will have a positive impact on those pesky mood swings.

6. Changes in your breasts

Do you look as though you’ve somehow gone up a cup size overnight? Or do your normal bras suddenly feeling like wearable torture devices? Changes in the shape and sensitivity of your breasts is another possible sign of pregnancy, along with darkening of the areolas. When discussing the cause of breast changes during early pregnancy, Dr Roger Henderson at Netdoctor writes: ‘This is due to a woman's hormone levels rapidly changing after conception, causing the glands inside the breast to grow and prepare for milk production and breastfeeding after baby is born.’ The good news? Any discomfort should pass as your pregnancy continues. If you think there’s anything suspicious about the changes in your breasts and don’t believe it’s related to pregnancy, speak to your GP.

7. Strange tastes and sensitivity to smell

Are you sure you want almond butter on pickles? Pregnancy can play havoc with your taste buds and sense of smell. Caffeinated drinks and alcohol can turn the stomachs of some during early pregnancy, with others affected by overpowering smells like fish or furniture polish. If you have food or smell issues that didn’t exist before, it could be your body’s way of saying, ‘We’re pregnant!’

Many women also describe having a strange, metallic taste in their mouth. Again, this is down to hormonal changes and should pass. You may also find that the naughty foods you used to love don’t appeal now – this is your body’s way of steering you towards healthier choices to nourish a growing baby.

Are you visiting the loo more than usual? This is another early sign of pregnancy and usually starts around six to eight weeks post-conception, with your body producing extra fluids during pregnancy. Drink most of your water intake in the day to avoid nightly trips to the loo. As with many early signs of pregnancy, frequent urination can also be a sign of other bladder disturbances, such as infection or inflammation. See your GP if you think any changes are not caused by pregnancy.