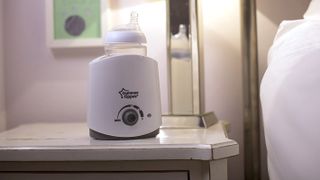 As the name suggests, bottle warmers are a pretty straightforward affair: they warm up bottles. But they can be surprisingly nifty and versatile things, heating bottles of milk or baby formula, and in some cases baby food too, with a range of at-home and travel options out there to try.

The official UK government advice is that you don’t need a bottle warmer if you’re making up formula, because that isn’t sterile: you’re supposed to make that fresh with very hot water for each feed. But for ready-made formula cartons or expressed milk that you’ve kept in the fridge, a bottle warmer can take the chill off and may make baby happier. We say “may” because some babies won’t be bothered about having warm milk, so it’s worth experimenting early on to find out whether you need a bottle warmer at all. However, if they’re particularly fussy feeders, a gadget that heats milk to the perfect temperature without faffing around is likely to come in handy, especially for those hazy-headed midnight feeds.

There are several kinds of baby bottle warmer. There are Thermos-style flasks that you can put the bottle into; car models that plug into the cigarette lighter socket; portable warmers designed for when you’re out and about; and traditional bottle warmers where you stick the bottle, pour water and press the power button.

The main thing to keep in mind is that some warmers are faster than others. While some can heat a bottle in under five minutes, others, for example in-car models, take forever to warm up, so it’s important to plan ahead.

It’s cheap. It’s cheerful. It sells by the truckload.

Tommee Tippee is the big daddy of baby products in the UK, possibly because its Closer To Nature bottles dominate the shelves of your local supermarket. Its bottle and food warmer is designed to heat those very bottles as well as glass jars or pouches of baby food, and it warms a bottle in just four minutes (based on 150ml from room temperature; if it’s been in the fridge it’ll need longer). You don’t have to use TT bottles if you don’t want to, but if you do this one’s a safe bet: TT’s own bottles tend to be wider than most, so generic bottle warmers might not be roomy enough. Just don’t forget to switch it off when you’re finished.

Let’s be honest: this one’s a flask with a separate container to put the bottle in. You pour boiling water into the flask bit before you head out, and when it’s time for a feed you pour the water into the container alongside your bottle and let it warm the milk. If you’re thinking that it’s no difference from finding a kettle and a bowl to pour the water into you’re right, but the important bit here is convenience: if you have your own warmer then you know it’s there when you need it, so you don’t need to beg shopkeepers, waiting staff or random strangers for access to a kettle or microwave. That alone’s probably worth 10 bob.

Faster than most, but a little pricey too

Some babies are impatient, and the thought of waiting four minutes for a warm bottle is too much for them to bear. Hurrah for Philips, then, because its AVENT bottle warmer takes just three minutes. The milk circulates as it’s being warmed to ensure there aren’t any hot spots - something microwave warming is infamous for - and it’s a good option for defrosting frozen milk too, with a dedicated defrost setting on the temperature selector. There’s no timer - you need to check the temperature yourself to see if the milk is ready, which seems an odd omission from a relatively expensive warmer - but once you’ve worked out the ideal time it’s a typically consistent Philips product, if a little pricier than rivals.

It looks like it belongs in Darth Vader’s kitchen but the Perfect Prep machine is your pal for making up formula: it’s essentially a coffee machine redesigned to make milk instead of macchiato. It works with any powdered formula milk, uses a shot of extremely hot water to kill bacteria and makes up a fresh bottle at the correct temperature in just under two minutes. Like coffee machines there’s a bit of faff involved - to keep it bacteria free you’ll need to replace the antibacterial filters fairly regularly - but it’s a brilliant alternative to bleary-eyed milk measuring in the wee small hours, and while it’s a little pricey every minute matters to sleep-deprived mums and dads.

Great Scot! This clever bottle warmer takes the hassle out of heating

If you’re not a fan of the guesswork inherent in a warmer that submerges the bottle in warm water, this steam bottle warmer might be right up your street. There’s no need to refill with every use, simply fill the reservoir tank and keep using until it runs out, which users found to be after around ten bottles. The sound and visual cues to let you know it’s ready and the auto switch-off after ten minutes are both nice touches, meaning you don’t have to worry after heading back to bed at… wait, what time is it? The only thing to watch out for is that, as it’s made for narrower Dr Browns bottles, it may not fit wider bottles such as those from Tommee Tippee.

The bottle warmer you need to treat like a baby

In-car bottle warmers are the poor relations of household ones: even the most powerful ones need about 15 minutes to do the job, and they tend to be extremely flimsy: the reviews of lighter socket-powered devices suggest that longevity isn’t something you can expect from any model. Diono’s is one of the more powerful models among the cheapies, and if you don’t chuck it around too much you shouldn’t regret spending just over a tenner on it. Just remember to unplug it once you’ve finished: there’s no automatic shutoff when the bottle reaches the required temperature. Alternatively, you could use a Thermos-style flask bottle warmer and pull over to warm the bottle up instead.