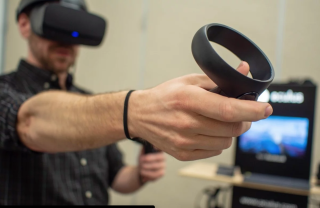 The Oculus Rift has been updated in the form of the Rift S, but that doesn't mean there are still countless original Rift CV1's being used for an incredible VR experience. Part of that optimal experience involves awesome accessories that range from basic things you ought to have on hand, to the absolute coolest gadgets to take VR to futuristic heights.

The earphones that Oculus offers are super easy to install; you just unscrew the headphones and screw the earphones into their place. The whole process takes about three minutes, and after you'll have earbuds that *actually* stay in your ear, even when you're in the middle of an intense game. They're designed to fit into your ear from the top down, so there's no awkward cable management.

The Touch controllers included with the Rift each require an AA battery to operate. Speaking from experience, you're going to want to invest early in some rechargeable batteries to save money in the long run. This pack includes a wall charger that can handle four AAs at once, so you shouldn't have any downtime while waiting for a charge.

The Oculus Rift is seemingly held back by the cables that tether it to the PC. They can become tangled and twisted as you move about your room-scale VR setup, breaking immersion when you remove the headset to get everything sorted. However, you can remove the need for a cable tether, all thanks to TPCast. It plugs into your Rift, attaches to the top headband, and eliminates the need for the long, snaking cable at your feet.

This six-foot extension cable from Monoprice is essential for anyone looking to get a room-scale Rift setup going. Sure, the built-in cable on the head-mounted display is lengthy, but while you're twisting and turning in your VR space, you can run out of room quickly. To keep your PC from toppling or your headset from coming off of your head, add an HDMI extension for plenty of cable length and a worry-free experience.

Toting your Oculus Rift over to a friend's house can be a bit scary. You don't want to just toss it into any old bag or box, and you definitely want it to have some padding. This case from Hyperkin has a bunch of modular, padded compartments that can hold your sensors (once you unscrew them from the stands), Touch controllers, headset, and cables securely and safely.

The foam padding around the inside of your Rift — the stuff that sits against your face and absorbs sweat — can get pretty grimy, especially if you're sharing your device between a few people. It's also not the *most* comfortable thing out there, which is why companies like VR Cover exist. This set includes two foam replacements that are covered in PU leather, making it easy to wipe down after each use.

If we're picking a few accessories

Enjoying the Oculus Rift with a dual-sensor setup is one thing, but adding a third or fourth for true room-scale VR allows you to get the best experience possible. You'll find that games are more immersive and you'll no doubt experience far better tracking than before. They're getting tougher to find at a reasonable price, but Oculus still has sensors for sale. You'll be glad you invested once you have everything set up.

I also recommend checking out Oculus earbuds, which I've been using steadily ever since making the switch. The stock headphones that come with the Rift aren't necessarily bad, but the earbuds seem to deliver a much more immersive experience and better sound quality. Don't worry; they're designed to stay in your ear even when playing Beat Saber.