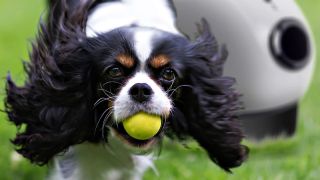 Playing fetch is probably your dog's favorite past time, but it can be exhausting if your pet tends to have more energy than you. Automatic ball launchers help save your pitching arm while still giving your pooch the workout they want and need. Our top pick is the iFetch Too interactive ball launcher because it accommodates most dogs, has multiple distance settings, and includes a rechargeable battery.

This launcher uses tennis and similar sized balls, has four launch settings, and a rechargeable battery. It's good for most dogs.

The iFetch Too Interactive Ball Launcher is an award-winning machine and a top pick among dog owners. This launcher stands under 15 feet high, making it versatile enough for most dogs. It has three launch distances, 10 feet, 25 feet, and 40 feet, which is easily set by pushing a button.

You can also set the launcher to random, and it will toss balls are various distances to give your dog variety. The iFetch Interactive uses tennis balls and other balls of the same size without a problem and comes with three balls. It also includes a power adapter to plug the launcher in and use it indoors, but it also has a rechargeable battery so you can take it outside.

When using the battery mode, this launcher tends to throw balls at shorter distances, and it doesn't hold a charge for very long. The feeder tray is also a bit shallow. Though it is coned shaped and has an incline to help guide balls into the launcher, some overzealous dogs may drop balls at an awkward angle or too hard and cause the ball to pop back out.

The launcher uses tennis balls, has a safety alarm that goes off before launching, and is suitable for both indoors and outside.

The Ready Set Fetch automatic dog ball launchers is from Franklin Sports and built to last a long time. Though it isn't as expensive as the other launchers we looked at, this one is still built sturdy and can be used both indoors and outdoors. It uses regular sized tennis balls and can be adjusted to launch anywhere between 10 feet and 40 feet using the dial controls. The feet are also adjustable to change the arch of the launch. The feed tray is really big to make it easier for your dog to return and reload the machine by itself. There is a safety alarm that sound right before a ball launches that warns dogs and people to back away. You can mute this feature if you'd like.

This launcher requires eight D batteries to run, though a power adapter is also included. Most dog owners who use this launcher report that it goes through batteries quickly, so if you use it outside away from a power source, you'll need to be prepared to replenish them often. Also, when tennis balls become too wet or muddy, they tend to no longer launch. Also, this dog ball launcher is a little too tall for some smaller dogs, but most medium and large dog breeds shouldn't have a problem using it.

This ball launcher is designed for big dogs with multiple distance settings, high arches, and a large feeder tray.

This is the best ball launcher for small dogs. It works well both indoors and outside and comes with three mini balls.

Playball by Felix & Fido only launches balls up to 20 feet, plenty far for most small dog breeds. This automatic ball launcher isn't very high, only 12 inches, which makes it easy for your dog to reload caught balls into the feeder. The machine easily switches between regular powered with a plugin adapter, or by batteries. It requires six C batteries when not plugged in. It is recommended for indoor use, though it works outside, too.

This launcher comes with three small balls that are only 1.5 inches in diameter. These balls can easily become a choking hazard for larger dogs and easily chewed to bits by a big pooch. The Felix & Fido doesn't accept balls not sold by the company very well. They tend to jam the machine.

This ball launcher has more settings and variation compared to other brands and has a motion sensor to keep you and your dog safe.

The PetSafe ball launcher is the most versatile of those we reviewed. It has six different distance settings up to 30 feet and nine angles for launch. This means a lot of variety for your dog as you go through the combinations. The ball launcher works with standard size tennis balls and comes with two of them. You can teach your dog to reload the launcher on its own by dropping caught balls into the feeding tray. There is a motion sensor on the front of the unit that keeps it from launching balls if it detects anything moving within seven feet of the machine.

This launcher is pretty big, so it works well with large dogs, but is still small enough for several smaller dog breeds to enjoy it, too. It has a rest most that automatically turns the whole thing off after 15 minutes. Unfortunately, this happens even if your dog is still playing, so you may be stuck turning it back on several times before your pooch is tuckered out. Also, several owners have reported that the loud alarm that sounds right before a ball launches it loud enough to startle timid dogs.

No power with no problems

No power is required with the iFetch Frenzy, so you can let your dog have fun for hours without having to stop to recharge.

This ball launcher doesn't use power at all and is created to be more of a brain game than for fetch. While this means balls won't be thrown far distances, it also means you don't have to worry about plugging it in or changing batteries. This machine is also much cheaper than electronic ball launchers. As balls are dropped into, iFetch Frenzy randomly rolls them out of three chutes at a distance between 6 feet and 12 feet.

This toy can be continually available for your dog to play with at will. It uses smaller size tennis balls rather than standard ones and comes with three to get you started. The iFetch Frenzy is made for smaller dogs, so we don't recommend it for larger dogs at all.

The most important consideration when choosing an automatic ball launcher is the size of your dog. Some launchers are great for small dogs but won't hold up with a bigger breed. Other launch balls high and far, which is excellent for large and active dogs, but may be too high for smaller dogs to reload on their own. This is why we recommend the iFetch Too interactive dog ball launcher. It accommodates most dog breeds, including shorter ones, and is a good choice if you have more than one dog.

This ball launcher has four different distance settings that range from 10 feet to 40 feet. It also has a random setting that will change the distance each time the ball is launched to keep your dog running and playing for a long time. A power adapter comes with this unit so you can plug it in at home, but it also has a built-in Lithium-ion rechargeable battery so you can take it outside to play without the worry of cords. When used in battery mode, the iFetch Too tends to launch balls closer rather than farther and uses up its charge pretty quickly. But overall, it is the best choice for most dogs.