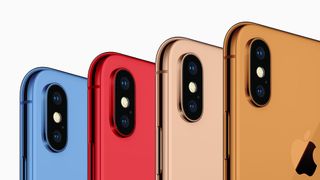 It's been another busy 24 hours in the world of tech, but to save you the trouble of reading through every single headline out there this morning, we've picked out the five best for you. Here's your daily digest of top tech stories, courtesy of our friends at TechRadar.

1. Bold new iPhone colours could be on the way

Would a new colour tempt you into buying an iPhone this year? We're expecting new handsets from Apple in September, and a reliable analyst source just suggested that we're getting several new colours too – including blue, orange, and a different shade of gold to the one we've seen in the past. The colours will be spread across three iPhone models.

2. This might be the final design of the Galaxy Note 9

Before we can fully turn our attention to new iPhones, there's the Galaxy Note 9 to think about, which is scheduled to launch on the 9th of August. As per a third-party phone case website, we now have a look at what could be the final design of the Note 9 – and it's an impressive-looking piece of kit. We'll be getting all the official details this time next month.

3. The Tesla Model 3 can now park itself

Thanks to regular software updates rolling out across the air, Tesla's fleet of cars continue to get smarter and more capable, and the clever Summon feature has now been pushed out to the Tesla Model 3. As on the Model S and Model X, that means the car is able to park all by itself – all that drivers have to do is push a few buttons when they get out of the car.

4. Five new MacBook models are apparently in the works

We're starting to hear more and more about new MacBook models in the pipeline, and it's about time – though as yet there's no official word from Apple about laptops updates. Thanks to filings at the Eurasian Economic Commission (EEC), we know that five new models are on the way – we're assuming two MacBooks and two MacBook Pros.

5. The Samsung Gear S4 again tipped to use Wear OS

Wear OS, Google's smartwatch platform, could use a boost right now – and the Samsung Gear S4 could be the device to provide it. Fresh rumours suggest the wearable is indeed going to run Wear OS when it launches in a couple of months, and as the tip comes from a reliable source, we're inclined to believe it. Plus, the name could switch to Galaxy Watch.