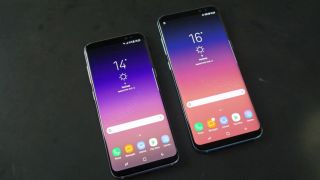 As you've probably noticed, the tech world never stands still, which is why we're pleased to present the five best stories from the last 24 hours from our pals at TechRadar. Today we've got a sneak preview of Samsung's next phones, phone news from Nokia and Huawei, and an interesting rumour about the future of macOS...

1. Take a look at the Samsung Galaxy S9 and S9 Plus

We're expecting Samsung's next pair of flagship phones to break cover before the end of February, which means the leaks and rumours are now coming thick and fast. The latest images to dribble out on to the web are convincing-looking redners showing the front and the back of the phones, and it's a good bet that this is what the final handsets are going to end up looking like. In just a few weeks' time, we should get official word from Samsung.

2. Mario Kart Tour will be Nintendo's next mobile game

Since Nintendo got serious about mobile games, starting with Super Mario Run, its titles have proved a smash hit on smartphones. Well, the next to arrive is going to be based on the Mario Kart franchise: as per Nintendo's Twitter, it's going to be called Mario Kart Tour and be out by March 2019 (or maybe much earlier). We don't have any more details for you at this stage beyond that, but you can start looking forward to Nintendo's next game now.

3. The beloved Nokia 3310 is getting an upgrade

Last year Nokia relaunched its classic Nokia 3310 phone under new owner HMD Global, but it was a little restricted in its software and connectivity, only working on 2G networks. Now though there's a much improved version of the dinky phone on the way, supporting 4G/LTE and running Android – it's already been announced for Chinese markets, and we should hear more details (including a price) at Mobile World Congress later this month.

4. Get ready for the arrival of the Huawei P20

It's all about the phones today: Huawei's next flagship, the Huawei P20, is expected to skip the Mobile World Congress show in Barcelona at the end of February, but is being tipped to show up on 27 March. That's according to an invitation received by the phones team at TechRadar, so we can be fairly sure of the date, and the phone itself is expected to come rocking improved innards, an even better camera, and probably some extra AI smarts too.

5. Your iOS apps could soon be running on macOS too

What exactly are Apple's plans for macOS and iOS? According to a new rumour floating around, the desktop software will soon be able to run mobile apps, allowing for a much more fluid experience across laptops and phones. This is already possible to some extent on the desktop OSes developed by Microsoft and Google, so it makes sense for Apple to catch up – though keep this firmly in the "unofficial rumour" pile for the time being.