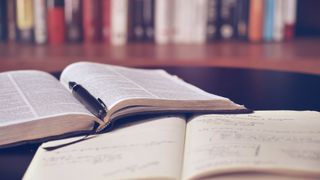 While it would demand a lot more space than we can spare here to write a full User’s Guide to Stephen King, we’ve rounded up, after a lot of thought, the top 10 books from the writer’s oeuvre to get you properly acquainted with the Master of Horror. Seasoned King fans may agree or disagree, but with each of our picks coming highly rated and recommended by critics and long-time fans alike, and each one offering something a little different for the curious reader, we think it’s a pretty good place to start. What is the best Stephen King book? Well, that's really down to you.

Not much of a horror fan? Skip to our round-up of the best non-fiction books of all time, for something a little lighter!

If you’ve been living under a rock in Darkest Peru for the past forty years, King is essentially a horror writer, and while pigeonholing him might be unfair, he’s just so good at it – not just for the richly realised monsters and boogeymen, but for addressing with horrifying astuteness the darkness of the souls and actions of human beings in seemingly ordinary neighbourhoods, in seemingly ordinary towns. While Salem’s Lot and It call to attention the thin line between the deep, dark, gut-churning horror of the unknown world and the fiendish depths to which even ordinary, respectable-seeming humans can sink, Pet Sematary balances its chilling paranormal storyline with an – if possible – even more troubling focus on the rudderless experience of grief and loss.

And sure, there’s time travel, creepy hotels, reanimated cats and more classic movie monsters than you can shake a crucifix at, but there are also steps away from the uncanny. The Stand’s all-destroying virus recalls uncomfortable images of real-life historic plagues and modern-day biological warfare; Misery is a book as much about mental illness and dependency as it is about an obsessive fan and a kidnapped writer (and a jolly good thriller, too); Carrie isn’t just about telekinesis and blood-soaked prom dresses, it’s about being a scared teenager.

Whichever book of King’s you decide to pick up first, or load onto your kindle, you’re sure to find more than you bargained for to connect with – just maybe sleep with the light on for a bit when you’re done...

Sometimes the scariest monster of all is… well, all of the monsters

It is an enormous book. At over a thousand pages, it’s quite enough to scare off those who aren’t used to consuming such huge tomes before they’ve even broken the spine, but King fans recommend persevering. Why? Well, probably because it’s arguably the ultimate Stephen King book. It shows a talented writer flexing his creative muscles to their fullest extent, mediating two narratives, multiple interludes from the past, a huge cast, and the most frightening foe of all, the thing that takes on the form of every childhood fear imaginable: It. Deeply troubling, tense and masterfully written, it’s easy to see why many consider it the best.

The book that’ll make you question everything, even yourself

If we were forced to find one word to describe The Stand, it’s ‘epic’. And we don’t mean epic as in ‘that party was epic’, we mean actual, proper, end of the world, good versus evil epic. In it, the survivors of a devastating flu nicknamed Captain Trips are faced from all sides with challenges to remain on the path of moral righteousness, the alternative being to succumb to the temptations of a world with no remaining rules, provoking those troubling ‘what would I do?’ meditations from the reader at every turn.

Best for: Finally getting round to a classic | Number of pages: 447 | Year published: 1977 | Original publisher: Doubleday

Even if you’ve never read The Shining or watched the film, the likelihood is that you’re familiar with at least some of the imagery: the creepy twins, the maze, Jack Nicholson’s face squished through a door, the late-70s decor (who knew a patterned carpet could be so sinister?) That The Shining has captured our imaginations so effortlessly isn’t necessarily down to Kubrick’s stellar interpretation though. In the book, King’s famous ability to build tension to unbearable levels is back in attendance, while his words reflect the “sheer inhuman evil” of the Overlook Hotel better than any filmic adaptation, however clever, could.

This masterful thriller takes a step away from the supernatural

A really good, tense thriller
A solid pick if you’re not into the paranormal
Not for those who don’t like psychological horror

While it’s unlikely that you’ve made it this far if you’re not fully on board with monsters, aliens and other common supernatural features of King’s body of work, Misery may be, if we can say so without being blasphemous, a welcome respite from the paranormal. Quite different from anything else King has written, it’s a straightforward thriller, and a stonking one at that, the tale of an obsessive fan holding a bestselling author captive under the guise of nursing him back to health after a car accident (that may not have been quite so accidental after all) in her neck of the woods.

A healthier way to live out all your teenage revenge fantasies

Carrie is the book that started it all, King’s first published novel, which he would later describe as being like "a cookie baked by a first grader – tasty enough, but kind of lumpy and burned on the bottom". We’re not personally too picky when it comes to cookies, so while there are admittedly some slower interludes featuring extracts from newspapers, police interview transcripts and other slightly distracting ephemera that the book could maybe do without, the rest more than makes up for it. The troubled teenager, the religious fanatic mother, the stomach-twisting pranks and horrifying revenge – we’re all so familiar with them now they’re almost tropes, but this is the original and best.

The small town with secrets, the sinister newcomer: it might’ve been done, but never with such skill as it has here

“Vampires take over a small town” might not be something that fills us with heart-rending dread in this post-Twilight world, but in Salem’s Lot, it’s incredibly scary. King masterfully builds suspense over the course of the novel, not quite revealing what it is that haunts writer and returning inhabitant Ben Mears about the town until it’s absolutely necessary. Take undead horror, some all-too-real human darkness hidden behind the veneer of respectability and throw in a few good metaphors for economically devastated small-town America, and you have yourself a cracking read.

Far from just a wonderful companion to the film

As in so many of King’s novels, the most uncomfortable feelings to come out of The Green Mile aren’t generated by the supernatural elements, but by the human experience of the people at its heart. John Coffey, a black man on death row in 1932, is arguably doomed from the start, and the fact that he didn’t commit the crime he’s been landed there for has very little to do with it. But even in this seemingly helpless slide towards tragedy, it’s the little things – the story being told from the guard’s perspective, the powerful ending, even the focus on trained pet mouse Mr Jingles – that elevate it.

All the excitement and glorious nostalgia of time travel, but with a dark heart

For those who were around when it happened, going back and stopping Lee Harvey Oswald from assassinating JFK is quite likely in the top five time travel fantasies, and it’s precisely this that King explores in this back-in-time novel. It’s peppered with commonalities and sentimental touches – time travelling protagonist Jake Epping explores the same world that King would have inhabited as an 11-year-old growing up in Maine, and he even crosses paths with Bev and Richie from It. Some found 11.22.63 a little laborious, feeling it lost momentum in the middle, while others loved the long pages spent describing life in a small Texan town in the late 1950s – either way, it’s all necessary to the story’s arc, and by all accounts, persevering holds rich rewards.

While it might be more an exploration of death and grief than a straightforward horror, that’s certainly not to say it won’t send a chill up your spine – even King himself called it his scariest book. As the story goes, he was so horrified with what he’d made that it almost didn’t make it to publication, but whether you believe that is up to you. All you need to know is that Pet Sematary might not be quite what you expect: rather than any discernible bad guys or evil monsters, there’s a feeling of unease which, after protagonist Louis Creed makes the decision you desperately hope he won’t, turns to proper, lingering fright.

10. Stephen King On Writing: A Memoir of the Craft

A bit of a wildcard perhaps, but no less of a classic

Best for: Getting to know the author | Number of pages: 345 | Year published: 1999 | Original publisher: Hodder & Stoughton

Proper writing advice from a master of the craft
Humorous and enjoyable
Not a story, as such

Not merely one of Stephen King’s best books, but arguably one of the best books ever written about the craft, On Writing is part memoir, part instruction manual, and all charm. Sandwiching writing advice between episodes from his own life as, variously, put-upon younger brother, sports writer, and novelist, it’s never dry: you know it from the foreword, where the author states he’s going to follow his own first piece of advice and “omit needless words”. At 345 pages, it’s small fry compared to most of King’s output, but it’s no less rich for it, filled with intelligent, common sense advice and characteristic humour.

Check out our other book guides for more inspiration: