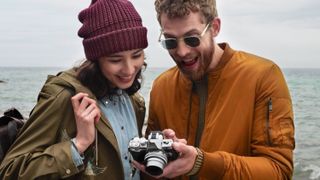 With the lightness and portability of a point and shoot camera and the customisability of a DSLR, mirrorless cameras are truly the best of both worlds, and while they’ve been popping up across the big brands for a little while now, they’ve really come into their own in the past few years. We’ve put together a list of the best mirrorless cameras out there at the moment to help you come to a decision on which one will best suit your needs.

Mirrorless cameras allow for stealthier shooting, not least because the lack of a mirror coming down means they don’t give out that telltale click, so if you’re looking for a second camera for weddings or other events, they’re a good bet for capturing that unguarded candid. And with only a proportion of the complex technical innards of DSLR, they’re lighter to carry, too. It’s the ability to change lenses that sets mirrorless cameras aside from other compact cameras, and while that one difference might not sound like much on its own, it’ll have a huge impact on how you shoot if you’ve never had the freedom to choose from multiple lenses before.

Gone are the days when you’d have to shell out for a separate dedicated video camera or even resentfully refer to your phone to capture those magic moments. And while you might often expect a little bit of compromise between still and video quality, usually (understandably) coming down in favour of photographs, mirrorless cameras are some of the best multi-taskers out there if you’re looking to shoot a combination of forms. Our pick of them all for video is the Panasonic Lumix GH5.

If the images you want to capture are predominantly landscapes, you might be better with a 360 camera to capture all round pictures, and for those off of their travels, check out our guide to the best travel cameras and our round-up of the best underwater cameras.

This small camera is the big daddy of mirrorless tech

Where to start with the A7R III? Well, how about by saying it’s not just our best mirrorless camera, but one of the best cameras full stop? That’s the high praise our colleagues over at TechRadar have lavished on it, and we’d be inclined to agree. A higher frame rate, a super-speedy autofocus, much-improved handling on its predecessor, spot-on focus in near-darkness, and a series of tweaks to the interface have all gone into making the best meeting between portability and control on the market, with absolutely no compromise.

This better, beefier take on the X-T1 is a superb all-rounder

While many photographers understandably have a lot of love for the X-T1, this newer incarnation has quite a lot more to write home about, including a much-improved AF system. Our friends at TechRadar gave it their Editor’s Choice seal of approval for its great handling, quick focusing and new sensor delivering superbly sharp images, plus little improvements that make for an overall quicker and more responsive shooting experience, like the boosted frame rate in burst mode.

A stalwart favourite from Sony

No, you’re not seeing things. The untrained eye would be hard-pressed to immediately see the differences between our first choice, the A7R III, and Sony’s more budget-friendly A7 II, but they both have their virtues. While the A7R III is all things to all shutterbugs, the entry-level A7II, despite not having had an upgrade in a few years, remains a popular choice for its meeting between beginner-friendly price and quality. If you’re looking to get into the photography game but don’t want to drop a load of cash, this is a certified respectable way to do so.

For no compromise between video expertise and proper photos, go for the Lumix

If you’re erring more on the side of still images, or on the side of videos, it can often feel like you’re having to compromise on one side or the other. There are no such compromises with the Panasonic Lumix GH5, engineered to perform like a dedicated video camera with enough versatility to master still shots too. While the ISO range isn’t the broadest out there, that seems to be about all that lets it down, with reviewers raving at the brilliant video spec (4K, dontcha know), quick-to-react performance, and solid build.

With its super-fast autofocus (0.06 seconds, to be precise) and a high fps rate in burst mode, this quick-off-the-mark camera is ideal for anyone looking to photograph fast-moving subjects, especially sports shots. Its only disappointment, if you can really call it that, is the absence of one true standout feature, but instead, it’s a thoroughly good all-rounder, with admirable performance in low light and noise reduction throughout, incredible responsiveness (thank that new processor) and a solid build.

New, improved, and loved by all

The OM-D E-M10 Mark III might share a lot of spec with its predecessor the Mark II, but with Olympus having improved, refined and generally pimped a number of important elements, it may still have the edge for new users. While sticking with the same sensor, the new TruePic VII processor is designed to improve shooting in low light, and the video shooting capabilities have been upped to 4K. Add that to the basics – feels great, really compact, loads of control – and it’s a winner.

A selfie-ready camera for days out and about

This small snapper might bring a whole new meaning to the term “compact camera”, but there’s a lot going on inside that tiny body, including the same 16mps Four Thirds sensor as some of the brand’s beefier offerings. This goes into making an entry-level lifestyle camera that’s light and compact enough to carry around on days out, easy enough for inexperienced users, but really performs. Oh, and it has a selfie screen, but that nifty extra comes at the cost of an EVF, so choose your side.

If you are on the hunt for the best cameras for weddings, take a browse through our round-up of the best instant cameras, the perfect way to keep your guests happy and capture those all important memories.

If you are a Vlogger looking for the perfect camera to capture those all important videos, our guide to the best vlogging cameras will have you covered.