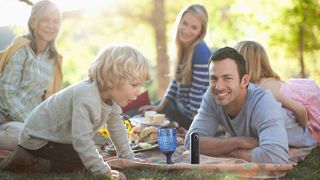 With the rise in technology such as Virtual reality and YouTube stars continually competing to produce the freshest content on their Vlogs, 360-degree cameras are fast becoming a must-have to keep up with the future of film. A 360 camera can provide an immersive experience to viewers, so if you’re looking to produce some content that really stands out from the crowd, investing in a decent 360 camera is vital.

Despite the best 360 cameras being incredibly new pieces of technology, there’s still a lot to learn before going out and picking one that’s right for you. Firstly, there are two main types of 360 degree camera: monoscopic and stereoscopic, or to us, single-lens and dual-lens.

The latter will give you a broader field of view, but the former tends to be of slightly better quality, and then both types of camera will connect to your smartphone where you will be able to edit your video and share your content on your desired platform. The likes of Facebook and YouTube support 360 degree viewing, however some other platforms such as Instagram haven’t quite joined the party.

But it’s not just the lens that’s important when picking the right 360 camera for you. Resolution and frames per second (FPS) will also determine the quality of the video, it is recommended to opt for at least 30 FPS in order to capture quality equal to that of a standard video camera. Then you’ve got to consider storage and battery life, as these two things can really affect efficiency when filming and can just be downright annoying. Rechargeable batteries and SD card slots might seem like a given, but just beware when you see a bargain as it’s possible these essentials aren’t included.

So whether you are a complete beginner or you’re somewhat versed in the art of 360-degree filming already, we’ve picked out some of the best cameras on the market right now for fully immersive content sharing.

For catching all your outdoor action, the Garmin VIRB 360 is a seen to be a solid choice amongst users. Whether you’re going on a hike or doing water sports, you’ll be able to catch every wave and every angle in 4K video footage. Stabilized footage is reportedly brilliant, and with the 4 built-in microphones you can expect high-quality wrap around sound, too.  You can edit your footage quickly and easily with the corresponding software on your phone, where 4K and RAW video stitching is apparently incredibly easy and has excellent results. The only downside to this camera is that the battery life is only 1 hour which can be a pain for days out, so just make sure you get an extra battery if you want to record more footage.

A high-spec camera for recording and taking still images

The Ricoh Theta V is a sleek-looking 360 camera which is highly rated for its picture quality. Stills are said to be slightly better quality than video but overall users have been really happy with their final footage. It comes with an intuitive app for your smartphone which allows you to stitch images and clips and then post them straight to your desired platform via Wi-Fi. You’ll be able to make movies up to 3 minutes long and the 8GB of memory allows you to store up to 9000 medium-sized images and between 65-175 minutes of video. You can now also live stream images so any budding blogger or vlogger can expect to have hours of fun with this camera.

The 360fly 4K camera looks pretty cool, and it a range of extra features including built-in accelerometer, e-compass, gyroscope and non-assisted GPS sensors designed for geo-tagging when you’re out and about.  Similarly to many of the 360 cameras currently on the market, video quality is regarded as brilliant on a phone, but isn’t always the best quality when watching on a larger screen. That being said, this 360-degree camera is loved for its intuitive one-touch system which allows you to record footage quickly and easily and then full edit it for Facebook or YouTube pretty much instantly.

A sharp camera for Insta addicts

Insta bloggers love the Insta360 One for creating high-quality videos that you can instantly upload to the ‘gram. It works on its own without a phone, but vlogger aficionados recommend using It whilst paired with the app on your phone for the best results. In doing so, you’ll be able to play around with different methods of filming in order to produce high-quality footage. You’ll need to purchase an Insta remote as this 360 camera doesn’t work with other Bluetooth remotes, and a selfie stick is necessary in order to get the best view, but for the price of this camera, users cannot fault it as a must-have gadget for social media vloggers.

If you’re considering stepping into the world of 360 images, then the Samsung Gear 360 could be a good place to start, if you own a Samsung phone that is. The F2.0 lens is designed to allow you to take stunning pictures in all light settings, so it has been said to perform well both indoors and outdoors. What people love about the Samsung Gear is that it is easy to get to grips with, so if you’re a complete novice in the vlogging world, you can rest assured this camera probably won’t blow your mind too much. Users were pleased with the 4K video results when stitched together in the app.

A compact cam for keeping in your pocket

If you like the sound of the Samsung Gear 360 but don’t have a Samsung phone, then the LG offers similar features but is compatible with all smartphones operating on both Android and iOS. Users love the minimal design of this camera which makes it easy to use, and unlike some other cameras, people seem to be very impressed with the charging time and battery life of the LG 360 Cam. Night time images aren’t the best, but for keeping in your pocket and recording footage of days out, and you can use your phone the remote to take snaps on the go.

The best instant cameras for quick quirky pics on the go.