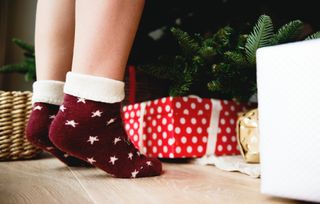 This is the year where scepticism is in abundance. Someone at school has probably taken a look at their chimney and had the common sense to think- how on earth does big old Father Christmas fit down this tiny gap? And while at the moment, we might be lucky enough to get away with saying that Father Christmas is magic as well as being maker and deliverer of all your wants and wishes, it won’t be long until the penny finally drops, for good.

In the meantime though, it’s time that you get ready to play secret santa for potentially the last year. That means keeping tabs on when they get enthusiastic about adverts, taking a quick nosy of their wish list before it’s sent off to the North Pole, and thinking of ways to replace those far-fetched desires with realistic, yet equally as exciting alternatives.

The transition between small child and pre-teen is in full swing, which means naff just won’t do. You’ve got to be the cool parent; you’ve got to know what’s on trend - take influence from the games they’re playing, what they perceive as grown up but is still suitably child-like.

At the same time, they’re old enough now to have discovered their own hobbies and developed their likes and dislikes. For the creatives out there, how about a drawing set to encourage their artistic flare? And for those that walk past the local skate park, their eyes widening with awe, perhaps a skateboard is in order (if all else fails they can sit and scoot with their hands)?

While board games might be considered boring, there are many exciting alternatives this year including cool games that enable to make your own movie using an iPhone and clay and the ever-popular Pie Face Showdown family game, which is guaranteed to get messy!

Take a look at our sleigh-full of ideas and discover the best christmas gifts for 8 year olds available right now.

Putting a girly twist on LEGO, this toy fashion boutique is perfect for those who love imaginative play

Best for: Building and imagination | Type: Dolls House | Educational: No | Power type: None

The great thing about Shopkins is there’s always scope for an addition, so when birthdays and Christmases come around, you know you this is going to be a failsafe. Fashion boutique this festive season then a fruit and veg stand for the next reason for gift giving, your child can create their own shopping district, creating no end of potential for imagination and creativity. With an RRP of under £10, this gift is hugely cost-effective, making a great all-round buy for your 8 year old this Christmas.

What could be better than combining two 8 year old crazes?

Best for: Construction | Type: LEGO | Educational: No | Power type: None

When you combine your child’s favourite computer game with the craze that is LEGO, you are sure to have a hit. With it’s simplistic design, it’s easy enough for your child to have a go at building it themselves or a fantastic option if you feel a little bonding time wouldn’t go amiss. Once the scene has been built, your child can also let their imagination run wild by creating their own scenes, keeping the novelty of the purchase going as long as possible.

A great buy for future shredders

While we can safely say that your child won’t be heading to the skatepark to do barrel rolls and backflips straight away, these are great wheels for getting out and about in the local cul-de-sac or up and down the drive. Without even realising it, your child is also getting familiar with the motions of surfing and snowboarding, which could give them a head start the next time the family head on their annual camping holiday to Cornwall or a half term break on the mountain.

A stress and anxiety reliever disguised as a flashy toy

Well known stores to street vendors are all getting on the fidget spinner hype and while, deep down, we know it’s just a craze - like Beyblades and Tamagotchis - it is the hottest thing of the moment, it’s allure probably heightened due to the fact that it’s banned in many classrooms up and down the country. There’s no doubt that there are genuine advantages to owning a fidget spinner - it does give them something to focus their attention on and the different light patterns will keep them fascinated- so if you’re searching for stocking fillers this Christmas, this is a no-brainer.

Tame the doodlers with this fascinating spirograph set

If your child loves colouring books, they’ll adore this Spirograph design set. In fact no combination will fail, so if your 8 year old is easily upset when their drawing goes wrong, they’ll always be satisfied with the outcome of this nifty colouring set. In fact, with so many combinations of spirograph to choose from, they’ll be spending Christmas Day and beyond coming up with crazy new drawings until the moment comes where you’re going to have to point at the fridge and ask them just where they propose you put their 50th picture - draw the line somewhere.

There’s a couple of options for your child if they want to experience the pro power of Tony Hawk on a skateboard. One - learn to walk on a skateboard so they’re learning the moves right from day one. Two - buy the Playstation game and let them flip as many times as they like and the computerised character will bare the brunt of the injuries. Three - purchase this pretty cool remote control skateboard and skate park, where half pipes, inner rolls and stairs and rails are all waiting to be mastered from the safety of your lounge carpet.

Arm yourself with a can of whipped cream and prepare for things to get messy!

Best for: Family fun | Type: Board game | Educational: No | Power type: None

So, you may have to face up to the fact that you, mum or dad, become the main element of entertainment in this game - because c’mon, what better way of getting back at that ‘unfair telling off’ the other day than splatting either of you in the face with whipped cream. Even better for the kids (and for you) is this showdown version means you go head to head, so the ground evens out eventually. Simple to construct and easy to wipe clean, this is an absolute must for the Christmas Day board game schedule.

Let them channel their inner cartoonist with this clay animation set

They’ve probably watched Wallace and Gromit and marvelled at the clay animation. Now, they can do exactly the same. From constructing their own characters from the clay to creating scenes using an array of props and staging, this is certainly a step up from the annual living room rendition of their favourite Disney film. While this probably will take patience and a little encouragement (and enthusiasm) from mum and dad, this promises to go down and storm, keeping them entertained for hours on Christmas day while you get on with cooking the turkey and all the trimmings.