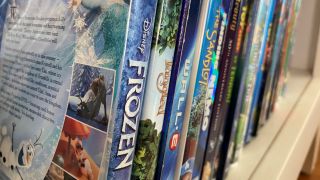 The greatest kids movies provide an enchanting story lead by a fun cast of characters. These tales can be funny, heartfelt, and adventurous. (Sometimes all three.) They are films designed to nurture flourishing young imaginations while entertaining the whole family. The best way of keeping favorite kid-friendly films on-hand is by collecting DVDs. If you're looking to enhance your movie library with the best in film, we've compiled a list of the greatest DVDs for kids.

We seriously can't let this one go. This icy film has already achieved classic status with its likable cast of characters adventuring in the magical snowy kingdom of Arendelle. The story follows Elsa, a queen with a chilly secret: she has the power to create ice and snow. Elsa lives a life of isolation to keep her powers and sister safe. But her emotions get the better of her, and she traps Arendelle in an eternal winter. The magical story explores the beauty of being unique and the power of sisterhood. This DVD is essential to your child's collection, also including the "Get a Horse!" Mickey Mouse Short.

The Secret Life of Pets

What do pets do when their humans aren't home? The answer: Get into a whole heap of trouble. The Secret Life of Pets explores the daily adventures of Max, a terrier, and his hilarious group of animal friends. But Max's life is altered when his human, Katie, brings home his new brother Duke. The tension between the new siblings sends them and their pack of animal friends on an unexpected journey through the streets of New York City. Join this silly gang of animals as they navigate an unexpected adventure. Kids will add this DVD to their most-watched list because of its fun story and special features. The entertaining extras include All About the Pets, Animals Can Talk: Meet the Actors, and The Best of Snowball.

Simba is an ambitious little cub, longing for the day where he can assume the throne. But the power-hungry plot of his jealous Uncle Scar (and his hyenas) alters Simba's path. Scar orchestrates his plan to kill his brother, Mufasa, and banish Simba. As Simba grows, he loses sight of his rightful path but eventually is forced to face the events of his past and claim his throne. The classic tale focuses on the importance of family and identity. This DVD can be an essential part of a kid's DVD collection, with its memorable story, animation, and soundtrack.

Both the Lego universe and the real world collide in this imaginative film that brings awesome by the brick-load. This story follows Emmett, an ordinary construction worker who is identified as special, "the special" to be exact. Emmett becomes the key to stopping the evil plans of Lord Business who seeks to freeze the universe with the Kragle. Emmett proves how special he is with the support of his Lego friends including Wyldstyle, Batman, and Unikitty. This special edition DVD set includes the feature film and a bunch of extras including an Everything Is Awesome sing-along, stories from the story team, outtakes, and more. Adding this DVD to your kid-friendly library will surely be a hit.

Baymax is a hug-able, inflatable personal companion robot that becomes family to robotics prodigy, Hiro Hamada, after a tragic life event. The suspicious cause of this devastating event leads Hiro, Baymax, and a diverse collection of mechanically-inclined friends, to team up. This ultra-smart group uses their strengths to become heroes (Big Hero Six), folding a nefarious plot. Add this touching story to your child's pile of favorite DVDs and learn what it means to be family. DVD extras include the "Feast" theatrical short and Big Animator 6: The Character Behind The Characters feature.

No price information
Check Amazon
One in a minion

Gru is the world's greatest villain until he is dethroned by his younger competition, Vector. To reclaim his pride and evil standing, Gru and his silly band of minions enact their plan to shrink and steal the moon. With pitfalls in this evil plan, Gru decides to adopt three girls Margo, Edith, and Agnes, to help him complete his mission. But Gru encounters one more threat to his bad ways, his dad status. Share this wonderfully silly tale with this DVD set including special features like Despicable Beats, Gru's Rocket Builder, and three minion mini-movies.

This classic movie details the journey of E.T., the terrestrial being, as he navigates his new earthly surroundings with the help of a boy named Elliot and his siblings. E.T.'s time on earth is met with curiosity, joy, and Reese's Pieces. But E.T.'s time is also limited, his earthly visit is only a stop on his way home. The heartfelt tale celebrates the beauty in differences and friendship. This 2-disc DVD is the perfect addition to your kid's collection with tons of extras including deleted scenes and the feature The Evolution and Creation of E.T.

It's the 60's and Scottie Smalls is new in town. What's a boy to do to make friends? Play baseball. But first, he must infiltrate the rag-tag team of baseball enthusiasts that practice at the local sandlot. The endorsement of the team's leader, Benny, leads Scottie on the most adventure-filled summer of his life. Scottie's need to be accepted by his newfound friends leaves him in the biggest pickle, so this team has to rally. This baseball movie showcases those friendship-forging formative years with humor and will become a fast favorite in your child's DVD collection.

Another one for the library

A kid's DVD library is a collection of stories designed to captivate and entertain. Beautiful animation, exceptional soundtracks, and enjoyable characters are the components that make each DVD a must-have. Our first pick is a chilly little film that uses an icy landscape as its backdrop. A beautiful, inaccessible ice queen, her sister, and even a lively snowman make-up its memorable cast of characters. Frozen is an enjoyable story about two sisters finding strength in themselves and each other.

If you're looking to add some films that are not so current, there are a variety of options, but none so touching as the story of a lost terrestrial being named E.T. Owning E.T. The Extra-Terrestrial on DVD means you'll be able to share a story that embraces differences and showcases the power of friendship. This 2-disk set includes the feature film and tons of enjoyable extras including deleted scenes and the evolution and creation of E.T.