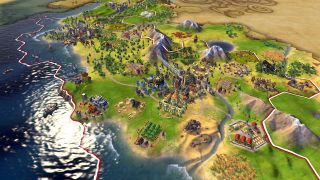 Until recently, strategy games seemed to be a genre that was built for gaming on a PC. While Steam might have more strategy games, you can still find some excellent options for your Nintendo Switch. Out of all of them, the King of 4X strategy is Civilization VI a game of world conquest that begins in the stone age and ends in the far future letting you take over the world, one turn at a time.

£7.99
View at CDKeys
£10.89
View at EBAY-GB
£19.36
View at Amazon
See all prices (12 found)
71 Amazon customer reviews
☆☆☆☆☆
Beautiful graphics
Tons of ways to play and win
Dozens of real manmade and natural wonders to build and discover
Game takes a while to get the hang of
AI can act erratically depending on difficulty level

Sid Meyers' Civilization series is well known as one of the best strategy game 50s franchises on the market. For over 20 years, it's delivered world where you take on the aspect of different civilizations as you attempt to take over the world using science, culture, war or politics to do it. Now, you can take advantage of the best game in the franchise on Nintendo Switch.

When you start with Civilization VI ,you pick which civilization you want to play as. There are over a dozen options and each one has its own advantages and disadvantages. There is also a starting bias that decides which kind of start you'll get. Over the course of the game, you'll need to uncover new technologies and culture in order to stay ahead of the pack. Depending on how you choose to play you may need to go to war, race to build wonders, create districts to increase religion and science output, and develop the land that you own. You'll also expand your borders, and create new cities as you explore the world at large.

While there are scenarios, the base game of Civilization VI drops you into a new randomly generated world each time you play. With an average game of 500 turns, you can expect to spend hours upon hours trying to wipe other civs off the map, or looking for the next great natural wonder for your next city.

The graphics themselves are also stellar. You get an excellent art form that renders icy tundra, green rolling hills, mountains, and the sea alike. Each different aspect of the map has it's own look, and different civilizations have different styles for the way the houses and cities look as they grow and develop.

One of the only downsides of Civilization VI is that it takes time to learn how all of the different pieces of gameplay come together. This is something you'll only learn by playing and through trial and error. Thankfully, there are some great tutorials built into the game and the Civopedia explains every unit, building, wonder and aspect of gameplay.

There are hundreds of hours of gameplay available, and with so many options for how you play it's a game that never gets old. Whether this is your first experience with the Civilization series or you've been playing for years, it won't be long until you are telling yourself "One more turn." Best of all, Nintendo Switch is the only console where you can play Civilization VI.

The Banner Saga is a game that plops you into the middle of an apocalypse as a Viking caravan in the bronze age. Your job is two-fold, to solve the issues amongst your caravan as well as fighting against enemies using your army on a grid. Gameplay is split into two separate but important sections. The first is combat. Your group will take on enemies on a grid map, getting different weapons, movement and skills depending on who — and what — they are. Combat, like the rest The Banner Saga gameplay requires a bit of cunning, and plenty of sacrifice. You're going to lose people, and it's going to happen often, whether you try to save them or not.

When you aren't on the field of battle, there is still plenty to manage and keep an eye on. You'll need to talk to your party members, settle squabbles, and manage supplies as you roam across the world. Considering the sun has stopped dead in the sky, and it seems like the end of the world is imminent; this is no small thing.

The graphics lend depth to the story of The Banner Saga. Hand drawn animations harken back to older animation styles like Sleeping Beauty, or The Last Unicorn. Instead of drawing you out of a grief choked story where every decision matters more than you think it does, they pull you deeper in. Your aim is to keep your people alive, but that isn't an easy process by any stretch. You'll run into problems with enemies as the end of the world closes in, and depending on the choices you make in and out of combat there are times when treasured allies become hated enemies too.

This War of Mine: Complete Edition

Check Amazon
Each playthrough changes gameplay
Gritty realistic graphics
Challenging choices in morality and scavenging
The story is bleak and not great if you are depressed.
Gameplay will punish you.

Civil war has broken out in the country of Graznavia, leaving everyday citizens trapped in the middle of the army and the rebels. A small group of survivors bands together to try and survive, building up their shelter, scavenging for food and supplies, and fighting off bandits, disease, and starvation. This is the gritty survival story of This War of Mine.

You play as a group of survivors during the war. There are a variety of different people you can choose to play, each one with their own skill set. These skills include being a better cook, having more inventory slots, or being a faster runner. Your goal is to keep everyone in your party alive through the duration of the civil war. The war usually lasts about 30-40 days, but can run longer or shorter.

Each day, you'll have to make decisions on how to use your scavenging. This includes building up your shelter, creating items to help like better stoves, heaters, weapons and lockpicks. At night, one character will go out to a location to scavenge items to help along the way like wood, books to be burned, food items, and valuables that can be sold or traded with other survivors.

Surviving isn't easy either. You'll have to combat the cold, diseases that can wipe you out, bandits that will attack during the night, and encounters while you are scavenging for supplies.

The grid based gameplay that Fire Emblem is known for returns with a new story. You'll play as an instructor at the Officer's Academy of the Church of Seiros, where you'll choose one of three factions to guide and teach. Each group has their own personalities and you'll lead them both through their academic lives, and through fights on the battlefield.

You'll choose from the Black Eagles, Blue Lions, or Golden Deer, and each one relates directly to one of the countries on the continent of Fódlan. You'll learn about Adrastea, Leicester, and Fergus as well as playing through four different protagonists: Byleth, Edelgard, Dimitri and Claude. The story follows the school life as the future rulers of the countries deal with battles, along with school life crises. As an instructor you'll be able to help lead your students, bond with them outside of battle, ensure they learn how to use new weapons and skills, and prepare them for their futures.

When you think of strategy games, you might not immediately think of Nintendo Switch, but that's where you'd be making a mistake. Some of the best games in the genre are available on Switch and nowhere else. Of course, if you want the best strategy game in the genre, you don't need to look any further than Civilization VI.

Whether you want to take over the world peacefully using culture and technology, or you plan on wiping every other Civilization off the map to do it, Civilization VI offers an amazing depth of gameplay that will keep you hooked for hundreds of hours. Each time you play is a different experience that lets you explore, build, go to war, and find new ways to excel. You can explore and find wonders, build manmade wonders, create districts, unlock new units, and choose between diplomacy or all-out war in your endeavors of conquest. It doesn't matter how you play, there is plenty here to love, and it makes Civilization VI the best strategy game on Nintendo Switch.