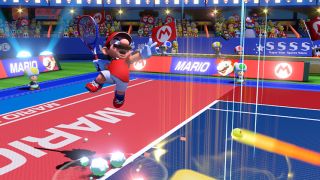 While the Nintendo Switch isn't swimming in Sports Games the way that Xbox One or PlayStation 4 are, there are still plenty of awesome games any Sports afficionado can love. Whether you want to score a goal on the Soccer pitch and hear fans scream as you do it, or you're more interested in going 45-love in a game of Tennis, you've got options. While there are several great games to pay attention to, Mario Tennis Aces manages to be the one that shouldn't be missed.

Mario Tennis has easily been one of the most fun side games in the Mario franchise for years. You can play Mario Tennis Aces on Nintendo Switch and return to your glory days on the court as Mario, along with over a dozen different characters.

The campaign works a bit strangely, to say the least. While you do travel to different Mario worlds and face off against a variety of bosses it isn't the story mode that most people were expecting. Instead you get a variety of locales during which you'll learn how to pull off trick shots, and make the most of the game. In some ways it feels like an expanded tutorial, albeit one that is still a lot of fun. This is because depending on the court there are crazy environmental hazards to deal with.

One of the perks of playing through the campaign is picking up a variety of different rackets. Each one has it's own set of stats so that you can pick the one that works the best for your personal play style. Mario also levels up as you play, gaining experience which effects speed, strength, and more.

Once you get through the campaign you still have an excellent arcade tennis game. You have all of the normal aspects of tennis, plus a few new additions that are less common. Trick shots, powered up moves, and charging swings all make you more effective against your opponents as you play.

Overall, Mario Tennis Aces provides a fun experience for fans of the franchise. While it does suffer from some issues, like a lackluster adventure mode, it's still tons of fun to play with friends. It's easily the best Sports game and built for Nintendo Switch.

The NBA 2K series has long been the go-to for fans of Basketball to live out their dreams via videogame. The franchise continues in a similar fashion with the newest release, NBA 2K19. With fluid mechanics, and plenty of different ways to play there is plenty here to sink your teeth into.

Gameplay feels smooth and it's easy to grasp. Specialty boosts like shooting skills and boosting teammates also make things more thrilling when you're in the midst of it. There are also plenty of customization options for gameplay like the positioning of cameras or having assistance to achieve pro moves.

There are all sorts of new skills and major updates to defensive play as well. While you'll have to learn how to take advantage of skill like specific dribbling techniques, once you've got it down the gameplay improves even further.

Gameplay mechanics themselves feel smooth and easy to grasp once you have mastered the basics. Specialty boosts like shooting skills and boosting teammates also make things more thrilling when you're in the midst of it. There are also plenty of customization options for gameplay like the positioning of cameras or having the game assist you through pro moves.

Defensive maneuvers give you a real sense of urgency when playing as well. You'll need to work out tight controls and keep an eye on the offense in order to truly do it justice. It means that rather than button mashing, keeping an eye on everything and feels far more strategic than it did in the past. Predicting what moves your opponent will make, and being there to stop them matters more than it ever has.

FIFA 19 makes a serious effort to deliver the best Soccer game on the market, and it's a winner whether you've been a fan on other consoles or it's the first time you've ever played.

Updates to the physics of the game include needing to keep a better eye on the space you are running through with the ball to get to successfully score a goal, passes will need to be focused on rather than the automatic passing of previous games, and the new addition of Champions League teams.

The graphics have gotten a boost too, and now they look better than ever, from pristine uniforms to the beads of sweat on players faces as they race across the pitch. Movement is also more fluid and realistic than it has ever been before.

There are several new modes of play available this year as well. Kick-Off has gotten a serious facelift, delivering nine new modes of play including Survival and No Rules. There is also a new stat tracking feature that gives you in-depth statistics for every match you play. FIFA Ultimate team has gotten a new mode as well, with Division Rivals. It's a new online mode with weekly competitions that pit you against players of similar skill levels to win FUT rewards.

$41.89
View at CDKeys
Check eBay
See all prices (2 found)
1 Walmart customer review
☆☆☆☆☆
Emphasis on proper form
Trainer tips on how to improve
Fun music that gets you moving
Not a game that some disabled folks will be able to play
You can hurt yourself by going too hard

When you think of video games, you might think of sitting alone on the couch without moving for hours on end. Well, Fitness Boxing is definitely not that kind of game. Instead, it's built to get your heart racing as you work your arms to a pulp. Fitness Boxing gives you a rhythm game that is built to do exactly what the title says, get you boxing for fitness.

The game starts with popular songs you already know and love, and then has you jabbing, throwing upper cuts, and hooks in beat. On the screen, you'll see an animated avatar performing the same moves and an indicator on your screen tells you which move you're supposed to be doing.

This isn't a game for lazy folks either. Proper form matters, far more than it ever has in a video game. If you don't throw a shot correctly, you'll know about it. In order to grab that coveted perfect score, you'll need to put some oomph into the punch using your whole body. As you play, your on-screen trainer will hand out tips on how to improve, and where your weaknesses are.

Since the game has such an emphasis on proper form, and moving, this is a game where you can expect to work up a sweat. You'll feel it in your arms after you play, and due to that it's a good call to wear clothing you'd wear to the gym.

While Nintendo Switch does have a decent handful of fun sports games, Mario Tennis Aces is the most fun you can have. It delivers a variety of different mechanics of gameplay, fun graphics, and the best arcade tennis game on the market today.