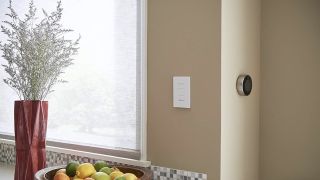 Installing a smart light switch is a great way to reap the benefits of connected lighting without having to worry about buying individual smart light bulbs in all different sizes. Best of all, having an in-wall smart switch means that you won't have to explain how your smart home works to your guests. The Lutron Caseta Dimmer Switch is the best overall smart switch for its ability to function without a neutral wire and it performs with a high level of responsiveness and reliability.

The Lutron Caseta Dimmer Switch combines robust smart home integration, solid performance, and more with an easy to install package that can have you up and running in no time. Lutron's low power Clear Connect technology enables the ability to function wirelessly without the need for a neutral wire, which many older homes may lack. This proprietary wireless protocol also provides ultra-fast response times and rock-solid reliability.

Lutron's Dimmer works with all of the major smart home platforms, such as Siri, Alexa, and the Google Assistant using just your voice for commands. Of course, you can also use the Caseta Wireless App, or Apple's Home app for those that use HomeKit, to toggle your lights on and off when you are away. Physical dimming buttons are also located on the switch itself, providing a quick and easy way to adjust the light levels in your home.

The Caseta Wireless Dimmer can also function in more complicated electrical scenarios, such as three-way wiring where two light switches control the same fixture. This type of wiring is a breeze with the Caseta Dimmer, as a coordinating Pico wireless remote replaces the second light switch entirely. Other Caseta accessories include fan speed control switches and traditional on and off switches to cover pretty much every switch type that you may need.

The Kasa Smart Light Switch from TP-Link is a cost-effective solution for those who just want the smart lighting basics. With a no frills, simple on and off design, the Kasa smart switch is simple to install and an accompanying App provides step by step instructions on how to get the job done in minutes.

TP-Links smart switch utilizes Wi-Fi for a direct connection to your home network, allowing it to work inside the home and out without the need of a separate dedicated hub. This switch also features a compact design, which is critical if you will be installing multiple switches within the same wall box as every inch counts when it comes to ensuring that your switches fit in properly.

Ecobee, the company behind the famous connected thermostats, has used its smart home expertise to bring a light switch to the market that truly puts the "smart" in smart light switches. The Switch+ houses a temperature sensor, motion sensor, night light, microphones and a speaker in one tiny package.

This technology enables the Switch+ to house a full version of Amazon's Alexa, built right into the switch. This means that you can simply ask Alexa to turn on and off the light without needing another device to manage it all. Having Alexa built right in opens the doors to other capabilities that were never once thought possible from a simple light switch.

The Belkin Wemo Dimmer Wi-Fi Light Switch is a thoughtfully designed device that is packed full of little touches that make it a solid choice. It has features such as an inset dimmer surface, where your finger acts as the sliding mechanism to dim the lights, and additional actions like a tap and hold to control other switches in your home. They are a perfect example of the power that a connected light switch brings.

Belkin's dimmer switch works with all of the smart home assistants and does so with a direct Wi-Fi connection that does not require any additional purchases or hardware. The Wemo dimmer is also backed by a three-year manufacturer's warranty, ensuring that your investment will be well protected for years to come.

The Smart Toggle Light Switch by General Electric puts modern smart technology into a tried and true, traditional form factor. The toggle design allows you to install these where needed without having to worry about them sticking out like a sore thumb if your home is already full of toggle switches.

GE's Toggle Switch connects to your home using Z-Wave technology, which requires an additional hub such as ones from Wink or SmartThings. Z-Wave allows the toggle switch to respond fast to commands and enables solid reliability along with lower prices.

The Eve Light Switch is a beautiful, minimalist take on the smart switch. Instead of a toggle or rocker switch, Eve's light switch incorporates one solid state capacitive touchpad that encompasses a large portion of the device. This makes turning on and off the lights a breeze with a single tap anywhere on the touchpad.

The Eve Light Switch uses Bluetooth technology for communications with Apple's HomeKit platform. A direct Bluetooth connection makes pairing fast and easy, with a simple scan of the included HomeKit code after installation. HomeKit integration enables powerful automations and scenes, such as turning off all the lights by saying "Goodnight" to Siri on your iOS devices or HomePod.

Having smart light switches in the home enables the smart home of the future, today. Setting your home's lighting devices to come on according to your schedule not only offers convenience but also provides a little extra security when you are not around by making it seem like someone is within the home.

If you are in the market for a light switch that is fast, reliable and is compatible with all of the major smart home platforms, then the Lutron Caseta Dimmer Switch is the right switch for you. The Caseta Dimmer Switch is also the only switch on the market that does not require a neutral wire, making it a perfect choice for those with older homes.