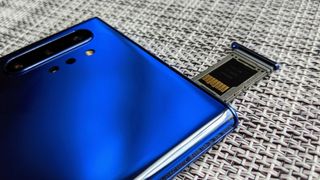 A MicroSD card lets you easily move your files, photos, and music from device to device without having to rely on steady Wi-Fi or costly data. It also helps if you like to load your phone up with apps, music, and movies if it didn't come with much internal storage, to

This has long been our preferred card for three reasons: it's reliable, it's fast, and it goes on sale frequently. It's available in 32GB to 512GB capacities, with write speeds for the 128GB and up boasting 100MB/s read and 90MB/s write speeds.

SanDisk has more powerful cards out there, but for most folks, the Ultra is the right answer. It has up to 100MB/s read speeds for accessing downloaded movies and music, and you can purchase it in sizes from 8GB up to 512GB.

This card boasts both read and write speeds over 90MB/s, is available in capacities from 32GB to 512GB, and is an excellent choice for power-users who intend to use the card for storing app data and recording 4K video.

This is a fast card that's perfect for shooting lots of 4K video and storing lots of game data, thanks to that V60 speed classification. You can get it in sizes from 32GB to 256GB.

The A2 classification means the SanDisk Extreme is optimized for apps, and it's available from 32GB up to the ludicrously massive 1TB if you need to hold your entire digital life on it.

Check Amazon
For constant use

Samsung built this model for constant recording and re-recording in dash cams and security cameras. Still, it's excellent for memory-strapped phones that are constantly writing to the microSD card. Available from 32GB to 128GB.

What do all these classes mean for your card?

There are a lot of different specs used to classify microSD card speeds, and most cards have at least two of these classifications in addition to the straight read/write speeds listed for the card. Here's your cheat sheet to these formats and which ones are better than others:

* Video Speed Class — Indicated by a stylized V followed by numbers from 6 to 90, this class is one of the newer classification systems and was developed specifically for shooting ultra-high-definition video. V30 starts at 30MB/s write speed, V60 starts at 60MB/s write speed, and V90 starts at 90MB/s, but unless your phone somehow shoots 8K video, you probably don't need a V90 card.

* Speed Class — Indicated by a number inside of a C, this was the original classification system for SD cards. Class 10 was as high as this class went, 10 MB/s write speed, and practically every card worth buying today is well beyond this speed at this point, so it's not as helpful an indicator of power/quality these days.

You may notice that all of these specs are focused on write speed — that tends to be the lower of the two rates on an SD card — so if you see a card with a "transfer" speed of 100MB/s but only a U3 class, the chances are that card has a read speed of 100MB/s and a write speed of 30MB/s.

For most users that just want to use a MicroSD for storing app data, music and movies for offline playback, you'll be perfectly fine with a U1 or U3 card like the Samsung EVO Select. If you're someone who intends to use a microSD card for shooting copious amounts of photos or 4K video, you might want to spring for a U3/V30 (30MB/s) or V60 card, such as the Lexar Professional 1000x.

Check your phone before you buy

In most cases, you can stick a 256GB card in a phone only rated for 128GB and be fine, but I generally try to stick to the rated sizes so that if something goes wrong, support can't blame you for using too big of a card. And unless your phone specifically says it can take a 1TB card, don't waste your money on one, as capacities that high do need a phone rated to handle them.