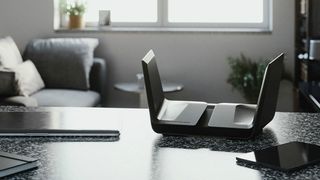 Sharing a connection can cause latency to spike and can ruin a good online game creating a need for gaming-focused routers. Aside from having good overall specifications, generally, the biggest thing that separates a standard router from a gaming router is prioritization which allows games to cut in line to keep delays to a minimum. With the software and raw power, we have come to expect from the Nighthawk line of routers, the NETGEAR Nighthawk AX8 keeps its gaming priorities straight to be the best overall gaming router you can buy.

Wi-Fi 6 is the newest and best standard for wireless internet. While the number of devices that support this advanced technology is still small, there's little doubt that future consoles and gaming laptops will feature this technology. NETGEAR has made sure to support the newest Wi-Fi 6 tech as well as a robust implementation of Wi-Fi 5 for all of your current devices.

With five gigabit Ethernet ports for LAN and one for WAN, as well as link aggregation for WAN to support a 2 Gbps internet connection, this router confidently supports the wired networking needs of most players. Two USB 3.0 ports also allow for an easy network storage drive without much of a speed sacrifice.

A quad-core 1.8 Ghz CPU keeps everything running smoothly even when traffic gets heavy. This is important when using a router with quality of service (QoS) software like this one has and managing advanced routing features like MU-MIMO. Overall, this router's advanced features and forward-looking Wi-Fi 6 support make this a great overall design, especially at the price.

It's hard not to develop a soft spot for the extravagant gaming hardware designs from Asus. With a healthy mix of matte black and gold, the Asus RT-AX88U tries to bring everything a gaming router needs with powerful software to back it up. It also brings along the latest wireless tech with Wi-Fi 6 supporting up to 6 Gbps data speeds.

Eight gigabit Ethernet ports around back next to two USB 3.1 ports makes it apparent that Asus wants this to be an all-in-one home networking solution. Powered by a 1.8 GHz quad-core CPU with 1 GB of RAM, this router will be free of slowdown even with heavy traffic.

Using its software to bring features like Adaptive QoS to prioritize gaming traffic and Wtfast to make sure you have the most direct connection online. These features will make sure that the only thing standing between you and the top of the scoreboard is your skill.

This router is a beast. Lovingly named the ROG Rapture GT-AX11000, this router exists to push some of the fastest speeds we've ever seen in the consumer space. With eight antennas and a matte black with orange color scheme, this router fits right in with the ROG, or Republic of Gaming brand.

With up to 11 Gbps in wireless data speeds in ideal conditions thanks to tri-band Wi-Fi and 2.5 Gbps over one wired Ethernet port as well as four more gigabit ports, there isn't much this can't do. Two USB 3.1 ports allow for quick network storage with plenty of raw horsepower to handle it all.

A 1.8 GHz quad-core CPU with 1 GB of RAM controls this router's powerful software with a quality of service package that Asus calls Triple-Level Game Acceleration. This software will make sure your gaming connection is prioritized above all else. All of this tech does come with a higher price and is only worth it to someone passionate about online gaming.

Some of the best values in routers right now are coming from high-end AC routers. With more devices supporting high-speed Wi-Fi all the time, even AC Wi-Fi is closer than ever to being an Ethernet replacement. With powerful quality of service features and fast AC3200 wireless speeds, the Linksys WRT32XB is an excellent value with a focus on Xbox Live gaming.

This router has an eSata port that can be used as a USB allowing for a fast hard drive connection. It also has a USB 3.0 port for more modern drives and four gigabit Ethernet ports for wired devices. Finally, an aggressive, angular stance in an all-black housing with more status lights than a Boeing 737 MAX shows off its hardcore credentials.

A 1.8 GHz dual-core CPU powers the software behind the scenes. With a custom software version focusing on Xbox gaming. Linksys claims ping time can be reduced by up to 65% during peak times. With MU-MIMO, a tri-band connection, and software called the Killer Prioritization Engine; gaming is this router's specialty with the power to handle the rest of your network at the same time.

"Extra" doesn't even begin to describe the appearance of the TP-Link Archer C5400X gaming router. Eight red-accented antennas stand tall with an angular uniformity that would look at home in a Halo game. Game prioritization software keeps ping times low and fast Wi-Fi up to AC5400, and fast Ethernet keeps things fast for the complete gaming package.

Two USB 3.0 ports add plenty of storage options alongside a massive eight gigabit Ethernet ports. Four of these ports can be used with link aggregation to allow for up to 2 Gbps for devices that need a faster-wired connection. This is very useful for network storage or a media server.

With a quad-core CPU at 1.8 GHz and 1 GB of RAM, this router has the horsepower to reliably run its suite of traffic optimization software.  MU-MIMO paired with other quality of service software keeps speeds high and consistent for gaming, even when network traffic gets high.

Electronics with the word "gaming" written on the box has started to feel like nothing more than marketing. The main reason I still like gaming routers is that the name allows them to push the envelope in everything from form factor to hardware. Gamers always demand more from their products, and these advancements keep pushing the industry forward as even the base product lines get more competitive.

All of these routers have implemented software to prioritize game traffic over other network traffic when equal treatment could cause spikes in latency.  As new applications help people take advantage of their connected devices with high-resolution music and videos, it's important to have a hardware and software combination that will be able to keep speeds high for all traffic while keeping game traffic as consistent as possible.

I do still have a soft spot for the gamer aesthetic of many gaming routers but when it comes to the tech I want to have around my home for a couple of years, I want something that feels a little more professional. The NETGEAR Nighthawk AX8 is a perfect example of how gaming passion can boil down to a powerful, efficient, and elegant router that still remembers how to keep its speed high and its pings low.