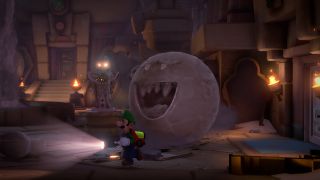 Nintendo Switch is the best console to check out if you want to play games that are great for the whole family. It has an excellent catalog to choose from whether you want to race in go-karts, explore the world of Pokemon, cook up a feast, or go head to head in ridiculous minigames. While there are plenty of excellent games to choose from, the best is Luigi's Mansion 3 with fun, humorous, easy to pick up gameplay that parents and kids alike will have fun with.

Luigi's Mansion 3 starts with Luigi, Mario, Peach, Polterpup, and three Toads heading to the Last Resort hotel for a real vacation. When he wakes to screams, he finds out that their longtime nemesis King Boo has captured his friends, and the entire hotel is crawling with ghosts.

He'll need to use his Poltergust Vacuum and a few other tricks up his sleeve to get through each floor of the hotel, suck up those spooks, and free his companions. Luigi's Mansion is a comedy filled game that uses puzzles mechanics to deliver a game that is a riot, whether you're playing by yourself or as a family. You'll need to complete puzzles on each floor using your equipment before you can move on and progress the story. However, the puzzles are never too challenging, making it great for kids and adults alike.

The game mechanics have also gotten a significant update since the last Luigi's Mansion game. You still have your trusty vacuum, but additions like your heavy plunger, slamming ghosts, and the spectral Gooigi adds layers to the game, which translate wonderfully.

With 2-player co-op, this is a game that family members can enjoy together, and since it isn't frightening so much as silly, it's safe for kids of just about any age. If you want a fun and challenging game that appeals to both parents and children, they don't get much better than Luigi's Mansion 3.

Prime
$54.99
View at Amazon
$58.79
View at CDKeys
$59.99
View at Adorama
See all prices (18 found)
980 Amazon customer reviews
☆☆☆☆☆
Easy for new players to jump in
More than 50 characters to choose from
Tons of gameplay options
Fights can be frustrating until you get the hang of controls

Super Smash Bros is what happens when you take a game built around having all of your favorite video game characters smash each other to smithereens. It's an explosion of chaos and fun made for people to play together. There are 108 different maps and 74 different unlockable characters that you can play, giving you tons of options for families when they want to play.

Controls in Smash Brothers are made to be approachable. You use the control stick and two buttons to move and launch attacks. Each character has their own special moves, but the basics stay the same across the board. There aren't any health bars in Smash, which makes it feel like you have a fighting chance even if you're getting punched off the platform. Instead, a percentile shows up above your character, the higher this number goes, the more likely it is that you can be KO'd and knocked completely off-screen.

Overall, Super Smash Brothers Ultimate delivers a game that is built for multiple players and has a low barrier for entry. It's an excellent option for parents and kids to play together, even though you're kicking each other off of the platforms. With tons of levels and dozens of characters to unlock, there is plenty here to love.

In Overcooked 2, you and up to three more friends all play as chefs in the same kitchen. The game aims to prepare and serve the dishes that the Unbread army asks. The meals you need to make will appear in the upper right corner of your screen, and once you serve a dish, another one will appear. Many recipes take several steps to complete, and some ingredients can be used on multiple food items.

Along with the chaotic gameplay of making recipes, each level has its flair. Some of them require you to use portals to get around, run along moving walkways, or deal with other chaos. At times, you might feel like Overcooked 2 is more of a platformer than a quick-play game, but it never gets less fun.

Mario Kart 8 Deluxe offers up 48 different tracks in a variety of terrains, including underwater portions. You'll see old favorites like Toad's Turnpike and Twisted Mansion, but there are tons of new ones as well, like Water Park or Cloudtop Cruise. 3DS players will also recognize several of the tracks. Each one offers up their pitfalls, and it'll take time to master them all. You have access to all of the tracks and characters (except one), including content that was initially part of DLC pack's back on WiiU's Mario Kart 8 in 2014. There are also several new characters for you to check out.

To access the best karts, you'll need to play some races. Winning races gives you coins, which you'll use to unlock various parts. You'll need those parts to upgrade your kart to make it a better contender when you're on the track. Three new kart bodies are available for Mario Kart 8 Deluxe. You can also play online with friends or random players from the internet, and it's a smooth process. Trying to find races is never particularly difficult, and lag doesn't seem to be an issue.

Splatoon 2 takes a different tact when it comes to a shooter. While each person does have a gun, you aren't firing bullets. Instead, your goal is to paint over the level and other combatants in the color of your team.  You can play in local or online multiplayer with up to eight players, which makes this an excellent game for families whether everyone is in the same location or not.

Splatoon 2 managed to take everything awesome about the first game and streamline it, delivering an updated experience that continues to bring hours of fun to your Nintendo Switch. There are a variety of different weapons you can use, including fast-paced inkbrushes, close-combat coverall sloshers, and dual-wielding pistols. There are also new weapon powerups that can break stalemates or shift the battle into your favor. Gear has even gotten an update, letting you unlock remarkable secondary abilities that allow you to customize how you play.

If you're looking for great games to play with your family, then you can't go wrong with Nintendo Switch. It has tons of excellent options, whether it's all adults playing, kids and their parents, and even teens playing with siblings or the adults in their life. Out of all the options out there, though, our favorite is Luigi's Mansion 3. It delivers fun gameplay that is enjoyable whether the player is 5 or 50.

You'll need to solve puzzles on a variety of different levels and consider your choices as you try to save your friends from the clutches of King Boo and his ghosts. With 2-player co-op, ways to return to levels, and new mechanics, it's worth every second you spend scratching your head as you work out the puzzles you need to complete.