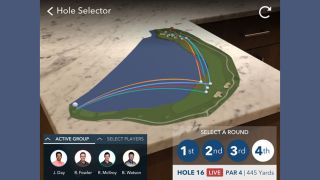 From high-resolution virtual reality, to golf games in augmented reality, to improvements on the Nintendo Switch, we've got a plethora of great tech news here today, courtesy of our friends at TechRadar. There are some more phone rumours and home gadgets as well.

1. VR is about to reach higher resolutions

Based on the programme guide for an upcoming display technology trade show (stick with us here), Google is planning to unveil a super-high-resolution screen for VR headsets – think in the region of three times the resolution and density of the displays inside the top headsets of today. Nothing official has been announced yet, but a fast 120Hz refresh rate is also promised, meaning virtual reality will become more realistic and immersive than ever.

2. The new Hive Hub will watch over your home

There's a new Hive Hub in town, and it's a lot better looking than the last one, if the aesthetics of your smart home kit matter to you (and they should). The Hive Hub 360 has a glossy plastic look and matches the new Hive View camera in terms of style – it's designed to sit at the centre of all your Hive gear and keep everything connected, but it also doubles up as a sound monitor, so it can listen out for and report any suspicious noises at home.

The Huawei P20 is set to be the biggest smartphone launch of the month of March, and thanks to a new leak we know more details about the battery, the camera, the internal storage, and the colours it's going to come in. We're big fans of the shades shown off in the leaked images, especially the funky-looking "twilight" one – if you like what you see, we're expecting Huawei to unveil the P20, the P20 Lite and the P20 Pro on 27 March in Paris.

4. Get more sociable on your Nintendo Switch

By all accounts the Nintendo Switch has had a successful first year on the market, and Nintendo seems keen to keep adding new features as it goes. The latest bit of functionality that the Switch has been given is the ability to add Facebook and Twitter friends – that means you don't have to rely on Friend Codes for some fulfilling multiplayer gaming action (assuming you have some Switch-owning friends on your Facebook and Twitter, that is).

With its ARKit packages for app developers, Apple is pushing augmented reality for everyone – or at least, everyone who owns an iPhone. The most recent app to come with some AR magic is the PGA Tour AR app for iOS, which lets you render 3D representations of particular holes on your kitchen top or coffee table. You can even overlay the shots taken by pro golfers in matches gone by. The app is free to download and use on iOS devices.