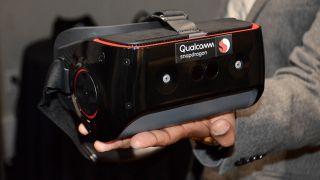 Thanks to our diligent tech news-watching friends at TechRadar, we've got another batch of fresh stories for you to digest: read on to learn about the latest developments in VR, smartwatches and retro calculators, as well as a possible price cut for the iPhone X2.

1. Qualcomm is ready to take VR to the next level

Qualcomm makes the chips found in many of the top Android flagship phones, but it's also interested in virtual reality as well. The company just unveiled a new reference VR headset that features the latest Snapdragon 845 – and doesn't need a connected computer or smartphone to work. This is a prototype intended for other manufacturers to build from, and it includes full spatial tracking support as well as internal eye-tracking technology.

2. The iPhone X2 could cost you less

We're a mere six months away from the follow-up to the 2017 iPhone X, and if the latest supply chain rumours are to be believed, this year's model is going to get a price cut – remember last year's handset had a starting price of £999/$999. Apparently Apple has managed to get the same components for 10 percent cheaper this time around, though whether all those savings will get passed on to the consumers, we'll have to wait and see.

3. Casio is the latest to head down the retro gadget route

Retro gadgets are having a moment right now – look at Nokia's rebooting of some of its classic handsets – and Casio has decided it's going to get in on the action. The Casio SL-880 updates the MG-880 of yesteryear, the calculator that had chunky buttons, a solar panel, and musical tones. Unfortunately, it looks like the launch is going to be limited to Japan for the time being, so you might struggle to get your hands on one anywhere else.

4. Hublot is bringing out a smartwatch

If you like your smartwatches to be very, very stylish, then you'll be interested in the news that respected Swiss watchmaker Hublot is getting in on the wearable action. The company says a smartwatch is on the way, but we don't have any more details yet except a price – 5,000 Swiss francs, which is a hefty £3,750 or $5,250 (the picture above is an existing Hublot watch). You'd better start saving if you want to wrap this one around your wrist.

5. Here's what's coming next from Lenovo and Moto

More phone rumours, this time to interest those after an Android handset with a low price and a big battery. The Moto E5 Plus has apparently been caught on camera, sporting an 18:9 aspect ratio screen (which are definitely in fashion right now), a single rear camera and a fingerprint sensor around the back. We're expecting the budget E5 Plus to make its debut in the next few weeks, alongside some slightly pricier handsets from Lenovo.