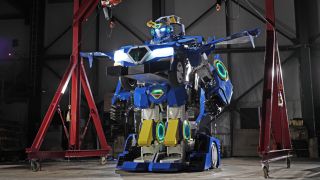 We've got a little bit of everything in today's tech news roundup, courtesy of our friends at TechRadar: real-life transformers, news on the best phones about to hit the market, a major Windows 10 update, and a mysterious AR/VR headset device on the way from Apple.

1. Apple is reportedly making a hi-res VR and AR headset

Rumours have been swirling for some time about Apple bringing out a virtual reality or augmented reality headset of its own, and the latest reports suggest it's going to combine AR and VR in one device, with an 8K (7680 x 4320) resolution per eye. That's more than double the resolution offered by the headsets on the market right now, and it won't need to be tethered to a PC either, apparently. However, you'll have to wait until 2020 to get it.

2. We've got another new flagship phone coming on 16 May

It looks like 16 May is shaping up to be quite a day for phone fans – it's the day that's been confirmed for the big OnePlus 6 reveal, and sources in Asia are saying it's also when we're going to see the Nokia X unveiled. The latest handset in the rebooted Nokia series is apparently going to feature a large screen, some top-end specs, and an iPhone X-style notch. You might want to clear some space in your diary for the middle of May...

In the nick of time Microsoft has managed to push out its April 2018 update for Windows 10 while the name still makes sense – the download is going to be available later today, according to an official blog post. Among the new features you can look forward to are a Timeline tool for retracing your steps with files or web browsing, and Focus Assist, which sounds like an enhanced Do Not Disturb mode. The new update is free for existing users.

4. You'll be able to crank up the volume on the new LG G7 ThinQ

We're only a couple of days away from the launch of the LG G7 ThinQ, which arrives on 2 May, and LG just revealed another of its features. Apparently the phone is going to have a Boombox Speaker that can crank out the tunes up to 10 times louder than standard smartphones – that's thanks to the extra speaker technology LG has built into the chassis, and the way space inside the handset is used to create a resonance chamber audio effect.

5. Real-life transformers could be heading to an amusement park near you

If you've ever watched a Transformers movie and wished it was real life, take note: a robotics company called Brave Robotics, based in Tokyo, has developed a 12-foot, 1.45 tonne robot called J-deite Ride, capable of transforming into a working car in just over a minute. However, it's maximum walking speed of 100 metres-per-hour (about 0.06 mph) might limit its usefulness somewhat. The bot is getting shown off to the public in May.