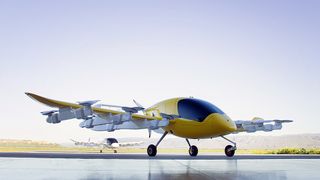 We're back with another selection of easily digestible breaking news stories from the world of tech, all of which have surfaced in the last 24 hours. Read on for details of the latest autonomous travel, free games on Twitch, and more, courtesy of our friends at TechRadar.

1. Prime members can now get free games on Twitch

The number of benefits you get as a member of Amazon Prime continues to grow and grow. The latest item on the list is access to a service called Free Games with Prime, which does exactly what its name suggests – Twitch users who also subscribe to Prime get themselves a handful of free games every month. The first wave of titles, including Superhot, Oxenfree, Mr Shifty and Shadow Tactics, lands on 15 March, this Thursday.

2. Deezer arrives on the Xbox One

Deezer might not be as well known as Spotify, but in many ways it matches its bigger streaming music rival in terms of features and catalogue size. The latest device to offer Deezer support is the Xbox One, so if you're a Deezer member (or plan on signing up) you can get access to more than 53 million tracks through your console. With Microsoft closing its own Groove Music service at the end of 2017, another option is definitely welcome.

3. A self-driving car could send you to sleep

Exciting new technology sure gets boring fast. Waymo has published a highlights reel showing some of the first people to ride its autonomous vehicles in Arizona, without a human driver at the wheel as backup – and once people get over the initial thrill, it would appear they go back to checking their phones, taking selfies, and in one case even dropping off for a doze. It's the future, but it's maybe a lot duller than we expected.

4. You could soon book a self-driving taxi plane

Speaking of self-driving vehicles, autonomous air taxi company Kitty Hawk is heading to New Zealand to put its fleet of planes through a rigorous testing procedure ready for a full commercial launch. The firm just got approval from the authorities to run demo flights with Cora, its two-seater, 36-foot wide electric aircraft, which could soon be ferrying you from place to place at 110mph. The aim is to launch a full service within three years.

5. Your next Windows update is coming next month

Windows 10 continues to get regular updates from Microsoft, including new features and bug fixes, and some of them have been quite substantial. The next major upgrade for the operating system is due to launch in April 2018, according to Microsoft, so prep your broadband connections accordingly. It's expected to be called the Spring Creators Update, with improvements for artificial intelligence processing, security and HDR video displays.