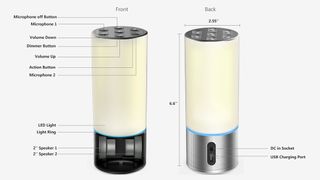 Get set for another roundup of the best tech news of the day, courtesy of our friends at TechRadar. This time around we've got news on a classic video game, a classic smartphone, new Samsung hardware, and an Amazon Echo that can also light up a room.

Amazon's Alexa digital assistant is finding its way into more and more of our smart devices, and lamps could be next: Amazon has revealed a template for a device called the Adition Lamp Speaker, which combines all the usual Alexa voice commands and responses with some serious illumination power. This is only a design framework for now, but Amazon is inviting other companies to build on it and bring out Alexa-powered lamps of their own.

2. Here's how fast the Samsung Galaxy Note 9 is

The Galaxy Note 9 is expected to be unveiled by Samsung before the summer is out, and the first benchmarks for the device have trickled out on to the web – the scores are predictably high, but not quite the best we've ever seen. The big question for the Note 9 is whether Samsung will manage to fit the fingerprint sensor under the screen, or leave it around the back as it did on the S9 phones. In a few months we should find out for sure.

Speaking of upcoming Samsung hardware, a Gear S4 smartwatch is in the works, according to rumours. Considering the Samsung Gear S3 is one of the best wearables you can buy right now, the S4 should be a device worth looking forward to – apparently the sleep tracking technology on the watch has been improved since last year's model, together with more health app improvements to help it take on the mighty Apple Watch.

The top-end gaming consoles of today from Sony and Microsoft are capable of outputting your games in 4K resolutions, but it depends on the game: not all of them support the top pixel count. You can now add Doom to that growing list, because Bethesda and iD Software have updated the classic shooter to support 4K. It isn't clear whether higher frame rates and HDR are also supported, but it's good to get access to all that gore in extra detail.

5. The classic Palm Pre could be about to get a reboot

From classic games to classic smartphones: the Palm Pre is the latest vintage handset rumoured to be getting a reboot, following a couple of Nokia phones. Apparently the TCL brand is working with US carrier Verizon to bring it back, so you can relive that fun feeling of sliding up your phone to reveal a mini keypad. The Palm software was one of the best features of the Pre phone, so let's hope that makes a comeback alongside the hardware.