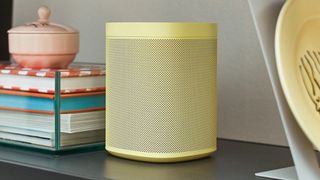 If you love your gadgets, we've got plenty for you to dig into in today's tech news roundup, courtesy of our friends at TechRadar. The five stories we've picked out cover news and rumours on the Pixelbook, the Apple Watch, the Sonos One, and the Moto G6 phones.

1. Pick up the Sonos One in some funky new colours

The Sonos One is the wireless speaker company's stab at a smart device, with support for Amazon Alexa already built-in and Google Assistant integration coming later this year. If you're prepared to part with an extra £30 (or $30 in the US) then you can now get the device in a funky range of new colours – red, green, yellow, pink and grey. If you prefer the more discreet white or black, those will still be available for the original price of £199/$199.

2. TicPods Free are the AirPods for Alexa and Google Assistant

Speaking of smart assistants, we've news of some new wireless headphones called the TicPods Free. Now these are very similar to the Apple AirPods line, but lack of originality aside, they do offer support for the Alexa and Google Assistant smart AIs in addition to Siri, so if you don't get on with Siri (or don't have an Apple device) then these could be just the ticket. They go on sale later this year with a price of $129 (about £90).

3. The Moto G6 breaks cover in an official teaser

After months of rumours and built-up, the Moto G6 phone family from Lenovo will finally get its official unveiling tomorrow, and we've been given an early treat in the form of an official teaser. The short clip shows off some of the shapes and curves of the Moto G6, indicating that the mid-range is the new top-end – these phones are set to come with dual-sensor cameras, stretched 18:9 screens, and some pretty decent internal specs.

4. The Apple Watch could soon be getting a serious upgrade

If Apple is planning an Apple Watch refresh later this year, it might come with a sensor-packed attachment – that's based on a patent filed back in 2015 that's just come to light. Patents don't always evolve into real products, but it looks like Apple is investigating the potential for add-ons to its flagship wearable, which might include sensors for altitude, air quality, or just about anything else. Definitely something to watch out for in the future.

5. Google might let you run Windows apps on your Pixelbook

For a Chromebook, the Pixelbook from Google is already a very capable machine, but it could be in line to get even more useful: hints in the Pixelbook code suggest that Google engineers are working on an AltOS mode that would allow a second operating system to be installed. Either Windows or Linux could be possibilities, but this might also be laying the ground for the arrival of Fuchsia OS, the new software Google's got in development.