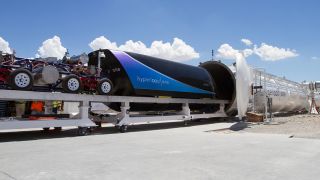 Dive right in to our regular daily roundup of all things technology: five hand-picked stories courtesy of our friends at TechRadar. This time we've got news on next-gen transportation, a new Spotify speaker, the second Essential Phone, and some AR fun from Facebook.

1. The Virgin Hyperloop is ready for another test

Elon Musk's vision of high-speed travel using pods running down tubes – the Hyperloop – is slowly inching towards reality. The entrepreneur has said that the next test of the technology will aim to get the pods up to half the speed of sound, which is some 380 miles per hour. Musk admits that the test is a little on the "nutty" side and could end up with "shredded metal", but promises that the trial run is going to be "exciting either way". Yikes.

2. Google Chrome is getting a visual revamp

Pay attention to detail and you might just notice references to a visual refresh for Google Chrome hidden away in the program's code, as the team at XDA Developers did over the weekend. Nothing is official yet, but apparently the web browser is in line for a big interface update in line with Google's Material Design approach (all white space and cards). The application is also being updated to become more touchscreen-friendly too.

3. The Essential Phone 2 will have an improved camera

We're expecting a follow up to last year's Essential Phone PH-1 – the debut from the new smartphone startup – at some point in May, and Essential head of industrial design Linda Jiang has been telling Business Insider that user feedback has been noted. The camera quality on the first handset came in for its fair share of criticism, so this time around Essential is focusing on making sure mobile photos end up looking the best they can be.

4. Does Spotify have an in-car speaker in the works?

Spotify has let it be known that it's lining up some kind of announcement for Tuesday 24 April, and while it hasn't said what it's going to involve, most industry analysts reckon some kind of smart speaker is on the way (well, everyone else is making one). Based a handful of promotional offers sent out to users in February, it could even be an in-car speaker for listening to your Spotify tunes on the move, no phone connection required.

5. Facebook is using AR to make posters come to life

Augmented reality is slowly seeping into more and more apps, and Facebook is the latest to try experimenting with AR. The social network is testing a feature in its mobile apps where you can point your phone at a movie poster and see it come to life – maybe have characters or dinosaurs or whatever jump out of the frame at you, or see an official trailer on a huge AR screen. More updates for the tech are expected to roll out later in the year.