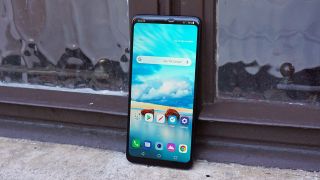 We're back with another roundup of the most interesting tech news stories of the day, courtesy of our friends at TechRadar. We've got updates on a new phone from LG, an upcoming phone from Nokia, a home robot, a major game title, and a smartwatch patent.

You've read about all the leaks and rumours, and now you can take a proper look at the LG G7 ThinQ. The newest flagship phone of 2018 was just made official, and we've got all the hands-on photos and thoughts you need. The phone brings with it a super-bright 6.1-inch LCD display, a dual-lens 16MP+16MP rear camera, and plenty of power under the hood, as well as some AI tricks that should mean your phone photos come out better than ever.

2. The Misty II home robot can be coded to do almost anything

Despite the promise of numerous sci-fi movies, we're not yet at the stage where we've got robots to help us with all the chores that need doing around the house. The newly crowdfunded Misty II droid could help change that, and what stands out about it is its flexibility – you can program it to do anything from greeting guests, to controlling your smart home devices, to bringing you a beer. It'll cost you $3,200 (about  £2,350) though.

3. Take a closer look at the Nokia X in this leaked video

The LG G7 ThinQ is now official, but there are plenty more flagship phone launches to look forward to in 2018 – including the Nokia X, which has just shown up in a video leaked on a Chinese social media site. You briefly see the front, back and right edge of the phone, though right now we're not sure whether this is a high-end or mid-range headset. We should know all the details soon, however, with the phone set to be unveiled on 16 May.

The launch of Red Dead Redemption 2 might still be half a year away, but there's a brand new trailer to whet your appetite for the much-anticipated game. The fresh clip introduces a lot more of the game's storyline, including steam train hold ups, wagon theft, and a fiery burlesque show. We also get a better look at lead character Dutch and his roguish band of misfits and criminals, intent on making the most of the dying days of the Wild West.

5. Huawei's next smartwatch could bring gaming to your wrist

Patents often offer up interesting insights to what tech firms are working on, and we just spied a new one from Huawei that suggests a gaming smartwatch could be on the way. We're not talking Grand Theft Auto on your wrist here, but the device would use its small screen, buttons and strap to provide interactive gaming experiences to keep you entertained anywhere, whether you're sat at home or suffering the daily commute.