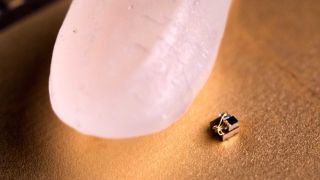 Behold the world's smallest computer, and a new audio-only Jurassic World game for Alexa, and rumours about upcoming Samsung and Chromebook hardware – it's all part of our essential tech news summary for today, gathered courtesy of our friends at TechRadar.

1. A grain of rice towers over the world's smallest computer

Technology continues to shrink, with researchers from the University of Michigan creating a new ultra-compact computer that is apparently the world's smallest ever. In comparison, a single grain of rice looks like a huge blob. You can't browse the web or check your emails on it, but experts say it could eventually be useful in the field of medical nanotechnology.

2. The new S Pen could be the Galaxy Note 9's best feature

The Galaxy Note 9 is apparently launching imminently, and one of the web's more well-known tipsters just suggested the accompanying S Pen stylus is going to be "worth the wait". It's set to be the biggest update in the history of the S Pen, @UniverseIce went on to say, so make of that what you will – perhaps it will be able to cast magic spells?

3. Major upgrades are heading to the Galaxy S10

Sticking with upcoming Samsung hardware, the Galaxy S10 due to launch next year is going to get some significant upgrades, according to reports. Apparently the iris scanner is going to be replaced with an advanced 3D face scanning component, while the phone will be the first Samsung handset to feature a fingerprint sensor embedded in the display.

4. Google's Chromebooks are getting a Snapdragon upgrade

You may have seen Qualcomm's Snapdragon chips coming to Windows 10 laptops – offering processing power on a par with a top-end smartphone, but vastly improving connectivity and battery life at the same time. According to the latest rumours, these chips are coming to Chromebooks too, with a device codenamed 'Cheza' in the works.

5. Welcome to Jurassic World... on your Echo

Movie makers love a good game tie-in, but the latest Jurassic World offering is a little unusual. Universal has launched an audio-only dino-themed game for Alexa devices, which tasks you with making decisions and trying to uncover the truth about Isla Nublar using only your voice. The first of six chapters is available to play for free right now.