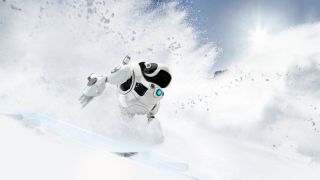 It's been another busy 24 hours in the world of tech but we're here to keep you right up to speed, courtesy of our friends at TechRadar – whether you want rumours about upcoming flagship phones or want to see robots sliding down snowy slopes, we've got you covered.

1. Samsung is still working on its in-screen fingerprint scanner

If you're a regular reader of our daily tech briefings you'll know that rumours about the Galaxy S9 and S9 Plus are arriving every day now, with the phone due to be unveiled a week on Sunday (25 February). The latest whisper from the supply chain suggests the fingerprint sensor will once again be on the back – eventually Samsung wants to put it under the front display, but we're going to have to wait a little while longer for that.

2. Robot skiers are having a great time at the Winter Olympics

If you've been tuning into the Winter Olympics in South Korea you might have noticed the latest craze in robotics: robot skiers. Engineers have been busy competing for a $10,000 prize to get their robots down a simple ski route the fastest, but as the footage in the link below shows, droids aren't going to be challenging humans at skiing any time soon. It turns out that staying balanced on the snow at high speeds is trickier than it looks.

3. This autonomous drone does all the camerawork for you

The new Skydio R1 drone might tempt you to part with your cash if you haven't already splashed out on a drone for yourself. It's key selling point is that the drone is fully autonomous, and can fly itself while you do whatever it is you need to do – it can predict what's going to happen next, avoid obstacles in its path, and follow you on your adventures. The drone is on sale now for a hefty $2,499 (about £1,810 / AU$3,180).

4. Thin and light laptops are getting a power boost

Every laptop is a compromise between power, portability, and battery life – the more heavy-duty the components, usually, the more battery they need and the more space they take up. Intel has just unveiled a new Core i3 processor to give a boost to laptops at the lower end of the market – any new laptops with the 8th-gen or Coffee Lake i3 chips should run faster, smoother, and for longer, so watch out for them at a tech retail store near you.

5. Fitbit is getting more concerned about your health

Fitbit has acquired a company called Twine Health, a move that suggests the maker of fitness wearables is about to take a greater interest in medical conditions like diabetes and hypertension – monitoring for those kind of problems would certainly be a level up from counting your steps every day. Look out for future Fitbit devices that can help you quit smoking and lose weight, as well as improve your overall fitness, in the near future.