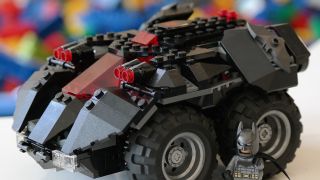 It's been another busy day in the world of tech, but we're here to get you caught right up, thanks to our friends at TechRadar. We've got updates on the upcoming flagship phone launch from HTC, a brilliant-looking new Batman toy from LEGO, and much more besides.

Next up on the list of 2018 flagship phones due to launch is the HTC U12 Plus, which we're expecting to see in the next week or so. New specs that have leaked out on the web – and which come from a very good source – corroborate what we've heard so far: this is going to be a 6-inch, 1440 x 2880 pixel resolution handset, with a Snapdragon 845 and 6GB of RAM inside. That should be enough to help it go toe-to-toe with the best phones of the year.

2. LEGO launching a remote-controlled Batmobile you build yourself

LEGO? We're interested. Batman? Keep talking. A remote-controlled LEGO Batmobile that you put together yourself? Sign us up at the earliest opportunity. That opportunity will come in August, when LEGO says it's launching the kit as part of its Super Heroes series. More techy, remote-controlled LEGO packs are on the way after this one as well. The Batmobile is made up o 321 pieces and can be yours for $160 (about £120) later this year.

Super-entrepreneur Elon Musk has been explaining more about how his Boring Company's high-speed pods are going to transport people under the streets of LA. Apparently, rides in these futuristic-looking vehicles will set you back just a dollar (or about 70p), and you'll be able to shoot from one side of LA to another at 150mph. Work continues on the network of subterranean tunnels, but Musk has also revealed the final name of the new project: Loop.

The near-infinite space exploration game No Man's Sky first arrived in 2016, but this year it's making its way to the Xbox – on 24 July, to be exact. There's also going to be an enhanced multiplayer mode included as well, so you can properly team up with other players and not just see them zoom by in the distance. After much pre-release hype, the game has had a mixed reaction on PlayStation and PC, so we'll see how it does on Xbox.

5. Two big updates are coming to older versions of Windows

Brace yourself if you're currently running the Creators Update or the Anniversary Update of Windows 10, because Microsoft has some treats for you. These older versions of the operating system are going to get patches to make them run faster and more reliably, though to get any genuinely new features you'll have to upgrade to the latest April 2018. The software upgrades are rolling out now and should appear automatically in Windows.