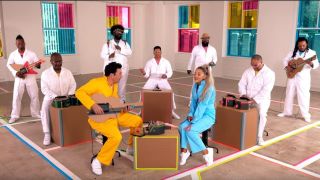 We're covering the whole gamut of tech news today, courtesy of our friends at TechRadar. We've got news of an upcoming wearable from Huawei, an upcoming Xbox controller from Microsoft, Google's new cloud storage offerings, and... a Nintendo Labo supergroup.

Nintendo Labo is the cardboard-based, DIY gadget-making extension to the Nintendo Switch console, and people have been putting it to all kinds of uses – including playing music, if you're Ariana Grande. With a little help from Jimmy Fallon and The Roots, the pop singer cranked out her new song No Tears Left to Cry. Click through to see the video of this pretty impressive feat and get some inspiration for your own Nintendo Labo creations.

2. Huawei's next super smartwatch is imminent

Huawei makes some of the best smartwatches out there, and according to the latest leaks to hit the web, a revamped version of the Huawei Watch 2 is about to hit the market. The big difference is going to be the introduction of an eSIM – so you can make and receive calls right from the watch – and extra sensors might be on the cards too. As yet we don't have any pricing details or a launch date for the new wearable, but watch this space.

3. Google One is the new cloud storage solution from Google

As we spend more of our time on the web, cloud storage is becoming more important, and Google just revamped its paid cloud storage offerings so you can get more gigabytes in the cloud for less. The newly rebranded Google One service offers some cheaper options for storing files online, as well as new options for sharing that storage with family members and getting support directly from Google. Click the link below to get all of the details.

With the E3 gaming convention coming up in June, we're starting to hear rumours about what the biggest names in the industry might be showing off – and apparently one of the reveals is going to be a new Xbox controller. Designed with accessibility in mind, it's intended to improve the gaming experience for those who struggle to use the standard gamepads, but as yet Microsoft isn't making any official comment on the leaked image.

5. HP has made an all-in-one computer with Alexa on board

If you feel like your current computer could use a little more input from Amazon's digital assistant, you're in luck, because HP just launched a new 34-inch Envy All-in-One PC with Alexa on board. As well as that huge, curved screen and the Alexa integration, the computer is coming with top-end Bang & Olufsen speakers and some pretty decent graphics capabilities too. Pricing and availability are being announced later this year.