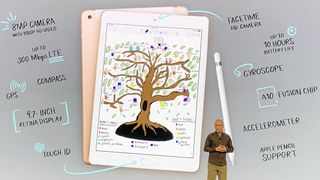 Apple has launched a new iPad, Huawei has launched two new smartphones, Sony has dropped the price of its PlayStation VR headset, and that's not all the important tech news we have for you today – read on for all the details, courtesy of our friends at TechRadar.

1. Apple has a brand new iPad on show

Apple has refreshed its cheapest full-sized iPad, introducing a new 9.7-inch tablet that sticks to last year's design but adds support for the Apple Pencil and a faster processor inside. The company also announced that it's updating its office apps – Pages, Keynote and Numbers – to support stylus input more easily. Even better, the device has been given a small price drop (at least in the UK), and will now cost you £319 rather than £329.

Huawei finally launched its 2018 flagship phones at a special launch event, and the P20 and P20 Pro are certainly impressive bits of kit. The cameras are especially noteworthy, with the P20 Pro featuring a three-lens system on the rear that can produce 3x optical zoom as well as a host of other effects, like portrait lighting. The phones are going on sale as we speak, so follow the link below if you're in the market for a new handset right now.

3. You can now get into PlayStation VR for less

If you've been waiting to pull the trigger on a PlayStation VR purchase, there's now no better time to leave the real world and head ot the virtual one – Sony has announced that the PSVR headset is getting a permanent price cut in the US and UK from tomorrow, 29 March. In the UK, you'll be able to get the PSVR Starter Pack for £259 rather than £349, which includes the headset itself as well as the PlayStation Camera and some apps.

We're suckers for tech rarities here at The Radar, and they don't get much better than this – a video of the Nokia Moonraker smartwatch, which Microsoft was developing in 2015 but ultimately decided to cancel. Would it have given the Apple Watch some serious competition? Going off this clip, probably not, but it's interesting to get a glimpse inside the inner workings and product development cycle of a huge tech firm like Microsoft.

5. All eyes on the Samsung Galaxy Note 9

Now that the Huawei P20 phones are official, which handset are we going to speculate about next? The Galaxy Note 9 from Samsung of course, which is set to eclipse even the S9 and S9 Plus in terms of power and screen size. The latest word from the rumour mill suggests the phone is going to have a huge 3,850mAh battery and a fingerprint sensor embedded under the screen – making it the first mainstream phone to feature the tech.