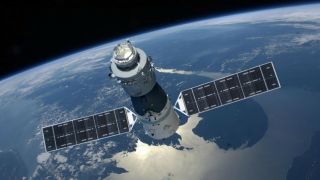 Whatever you've been up to over the long Easter weekend, the biggest companies in tech have barely missed a beat. Here we've got your regular news digest, courtesy of our friends at TechRadar, including updates on phones, laptops, space internet and future VR systems.

1. Apple wants to improve your self-driving car ride with VR

Once the robots are driving all our cars, journeys might get rather boring, but Apple is keen to make sure that's not the case. The company just filed a patent for an in-car virtual reality system, where you could don a headset and be transported into any kind of world you like – travellers could even sync the VR experience with their vehicle's movements, and take a ride through a dinosaur-filled jungle or down a relaxing river, for example.

You might not have shelled out for a virtual reality headset yet, but the technology continues to get better and better, with HTC adding new features to its Vive platform: users can now sync the resolution of their games and apps to match the hardware they're running VR with, which should make it easier to use less powerful specs. Considering the price of entry to VR worlds is fairly steep, it's another welcome step towards mass appeal.

SpaceX has already had some jaw-dropping adventures in space, but it's not finished yet. The company's latest endeavour is a plan to bring high-speed, low-latency broadband to everyone in the world using a system of 12,000 satellites known as Starlink: the Federal Communications Commission in the US just approved a revised draft of the 2016 proposal submitted by SpaceX. More than 4,000 satellites are scheduled to be online by 2024.

4. Lenovo has a long list of Moto phones in the pipeline

No matter what the time of year, there's always another smartphone launch to look forward to, and right now the upcoming Moto phones made by Lenovo are the ones we're hearing most about. Recent leaks have revealed a little bit more about the Moto Z3 Play, a less expensive version of the Moto Z3 flagship we're expecting to see in the next couple of months, while the Moto G line is also due for a refresh, with three more phones in store.

If you're in the market for cheap but competent Windows 10 laptops, Samsung just gave you three more options to pick from – the Notebook 3 (two models) and Notebook 5 (one model) let you get your computing done on full-sized keyboards and with the latest Intel i7 processors, with a choice of configurations and colours available. Exact prices haven't yet been confirmed, but the laptops are going on sale in some countries later this month.