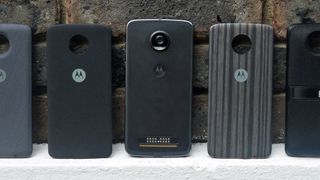 It might be a long weekend in certain parts of the world, but there's still plenty of breaking technology news to talk about. We've got the pick of the day's stories right here, courtesy of our friends at TechRadar, and they're dominated by rumours of upcoming launches...

1. Pictures of the Moto Z3 Play leak out

One of the most eagerly anticipated handsets of 2018 is the Moto Z3 Play, which should offer some decent specs at a reasonable price for Android fans. A couple of intriguing leaked images just made their way online, purportedly showing the phone's 6-inch display and a Moto Mod that enables 5G connectivity. The signs are that a launch is very close.

2. We might know the top-end spec of the Galaxy Note 9

Samsung's next flagship phone should be with us within a couple of months or so, and new rumours point to a phone ready to beat everything that's come before it in terms of specs: Samsung is apparently prepping a configuration with 8GB of RAM and 512GB of storage. Various other options will be available too, with a late July launch mooted.

Apple is holding its annual WWDC developer event next week, and while the focus is usually on software, we just might get some new hardware too. Delivery dates are slipping and stock levels are low for some of the MacBook and MacBook Pro models on the Apple website – and that's a fairly good indicator that a product refresh might be in the offing.

4. Get ready to unlock your hotel room and car with your iPhone

Speaking of WWDC 2018, we should also get our first look at iOS 12 at the event, and there's talk that it will give developers more access to the Near Field Communication (NFC) chips in the iPhone 6 and newer models. What that means in practice is apps that can unlock your hotel room and car with a tap, saving you from using cards and keys instead.

5. Nokia has something to show off on 29 May

Nokia has taken to Twitter to tease a product launch happening tomorrow (Tuesday 29 May). All we have to go off so far is a #chargedup hashtag, so it could be anything from a new phone to a battery case – there have been rumours that Nokia is prepping refreshes for both its low-end and flagship mobile products. Tomorrow we'll find out for sure.