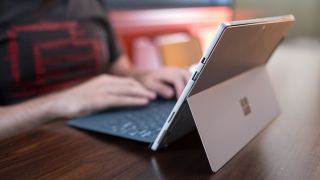 With upcoming products on the slate from Apple, Microsoft and Samsung, it's a great time to be a tech fan – and as well as news on those gadgets, we've got details of an innovative new phone and fresh Amazon Twitch Prime deals, all courtesy of our friends at TechRadar.

1. This could be the 2018 MacBook Pro we've been waiting for

How about some new MacBook Pros, Apple? Over a year since the last refresh, we're still waiting for upgrades on the premium laptops – but a new benchmark spotted on the web suggests they're not far off. The stats show an Intel Core i7-8559U processor under the hood, which would give quite a performance boost over the same laptop from last year.

2. Get ready for a nine-lens smartphone camera

Camera maker Light has us intrigued with the smartphone that it's promising to unveil later this year: the rear camera is apparently going to feature no less than nine lenses, which puts the triple-lens snapper on the Huawei P20 Pro to shame. Apparently that will equate to 64MP photos, so we're going to be watching closely for the official launch.

3. The Galaxy X could be with us sooner than expected

We've been waiting for Samsung's legendary folding Galaxy X phone for what seems like aeons, but maybe we'll be able to get a look at it this January – according to one of the better tipsters on the web, the next-gen handset will launch at CES 2019 in January, while the more conventional Galaxy S10 is going to make its bow at MWC in February 2019.

Microsoft is strongly rumoured to be readying a cheaper Surface tablet to go head-to-head with the entry-level iPad, and thanks to leaks from insider sources, we now know a little bit more about it. The device configurations are said to feature Intel Pentium processors and either 4GB or 8GB of RAM, though we can't be sure until Microsoft makes them official.

5. Head over to Twitch to start Amazon Prime Day early

If you're a Twitch Prime and Amazon Prime subscriber, you can now access 21 new and classic games over the web, as Amazon gets its Prime Day extravaganza started early. Extra titles are being released every day until the 18th of July, and you can already get at titles like Pillars of Eternity and QUBE 2. Prime Day itself gets underway on the 16th of July.