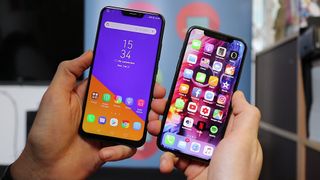 What's happening in the hectic tech world then? We've got the answers here, courtesy of our sister site TechRadar, and today's scoops cover more leaks for phones from OnePlus and Huawei, plus details of the next version of Android and some weird Alexa behaviour.

Android P, the 2018 update for Google's mobile operating system has arrived – though you can't get your hands on it yet, as it's only available to developers for the time being. Included in the first release is support for displays with notches, improved camera and graphics performance and more, though Google will be keeping news of the bigger features secret until later in the year (keep your eyes on Google I/O at the start of May).

When Android P does drop for the public at large – probably in the late summer or early autumn – it'll be Google's Pixel phones that get first dibs on the software. Google has confirmed that the devices it launched back in 2015 won't get the new update, so it's bad luck if you're an owner of a Nexus 5X, Nexus 6P or Pixel C tablet. Still, it's a good excuse to treat yourself to a brand new smartphone, one that is in line for an Android P update.

3. Amazon Echos keep laughing and no one's sure why

Is this a sign of the impending AI-powered robot apocalypse? Devices with Amazon Alexa inside, like the Amazon Echo, have suddenly started cackling out loud for no apparent reason – that's understandably upsetting for anyone owning a smart speaker. Amazon says it's aware of the problem and is working on a fix, with the company claiming Alexa is mistakenly hearing the word "laugh" somewhere in the room. You have been warned.

4. The OnePlus 6 is embracing the notch life...

It wouldn't be a decent day in tech news if there weren't some more phone leaks to pore over, and we've got news on the upcoming OnePlus 6 flagship, which is set to once again combine high-end specs with a very reasonable price. According to insider sources, the phone is going to come rocking a Snapdragon 845 processor – pretty much the best available right now – and a notch on the front of the display (ready for Android P then).

We've seen a barrage of leaks about the Huawei P20, the flagship that's expected to launch on the 27th of this month, and the latest unofficial pictures to find their way onto the web show the P20, the P20 Pro and the P20 Lite in a series of authentic-looking renders. Like the OnePlus 6, these phones have a notch on the front of the display, and it looks as though the high-end Pro model is going to have three sensors for the rear camera setup.