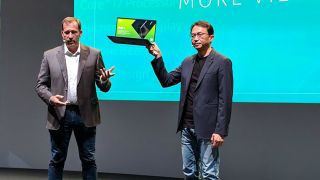 We're all about IFA 2018 today, the big tech show currently taking place in Berlin. There are new products from Asus, Acer, HTC and Sonos, and we've also got news of a special iPhone auction underway on eBay – here are the details, courtesy of our friends at TechRadar.

1. The new Asus ZenBooks are more compact than ever

We traditionally see a flood of new laptops at IFA, and this year looks like being no different. Asus has been quick out of the blocks with a refresh to its ZenBook line, adding new models that are thinner and lighter than ever before, and which banish the display bezels to almost nothing at the same time. These laptops should go on sale in October.

2. The HTC U12 Life brings fresh looks at a low price

HTC is also present at IFA 2018 in Berlin, and has pushed out a cheaper version of its HTC U12 flagship phone. The HTC U12 is cheaper (it'll set you back £299 or €349), and comes with an appealing dual-texture design available in some striking colours. The specs on the 6.1-inch handset are relatively decent too, and there's a dual-lens rear camera at the back.

3. Get your hands on a prototype first-gen iPhone

Let's take a break from IFA for a moment and cast our minds back to 2007 – the year when the iPhone first appeared. An auction for a prototype version of the first-generation iPhone has popped up on eBay, which looks genuine enough – and at the time of writing the top bid sits at $12,300 (about £9,930), so you'll have to spend some serious money to get it.

4. Upgrade your older kit with the Sonos Amp

Sonos doesn't want to let your old speakers and other kit get left out of the smart audio revolution, so it's upgraded its Sonos Connect Amp (launched more than a decade ago) with a new Sonos Amp. The latest gadget from the company features HDMI and audio inputs, plus all the usual Sonos smarts. It's yours for $599 (about £460) in February 2019.

5. Acer has some super-thin, super-light laptops of its own

Not to be outdone by Asus at IFA 2018, Acer has been showing off some super-thin, super-light laptops of its own. One of the highlights in a whole bunch of new laptop models is the updated Acer Swift 7, thinner than ever before at less than a centimetre (0.39 inches) thick, and with a huge screen-to-body ratio of 92% for the 14-inch screen as well.