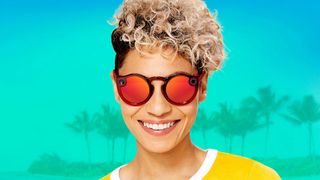 There's plenty to dig into in today's pick of the best tech headlines of the day, courtesy of our friends at TechRadar: we've got news of new smart specs from Snapchat, a new iPhone from Apple (maybe), a new watch for golfers, and a white edition of the OnePlus 6.

1. Snapchat launches version 2 of its Spectacles

Apparently the first version of the Snapchat Spectacles didn't sell all that well, but Snapchat owner Snap isn't deterred – it just revealed version 2 of the shades that come with a miniature camera embedded in them. New in this version of the £149.99/$149.99 specs are the ability to take photos as well as videos, and a certain amount of water resistance. Brand new colours and a slimmed-down design have also been introduced.

If the rumours are to be believed, the next iPhone we see won't be the direct successor to the iPhone X, but rather the iPhone SE 2. An admittedly sketchy batch of leaked images of the upcoming phone just hit the internet, and they show the headphone jack is being retained, and a glass back is being added to enable wireless charging. If the phone is indeed about to be announced, we're likely to hear about it in the next couple of months.

One for the golfers among you: Garmin just launched the Approach S10 smartwatch, packed with data on 41,000 golf courses, so you can up your game and lower your handicap with the help of technology. The new wearable comes with GPS to help you measure hole and hazard distances, and Garmin says it's apparently good for around 12 hours of battery life. It's launching soon for £139.99, which works out at roughly $195.

The OnePlus 6 is getting its full and official unveiling on the 16th of May, but in the meantime you can catch a glimpse of a white version of the handset in a preview video that OnePlus itself made public on its YouTube channel. The devices themselves are pixelated, but it's clear that white as well as black models will be available, and from the user reactions in the clip we'd say these are phones that are going to be worth waiting for.

After months of promises, iTunes has finally arrived as an official Windows 10 app – that is, one that can be downloaded from the Windows Store and run on Windows 10 S, available alongside the traditional desktop version. Eventually, it will phase out the existing version of iTunes, though there's really not all that much difference between them: the programs are just packaged differently, and it won't affect the iTunes media libraries you've built up.