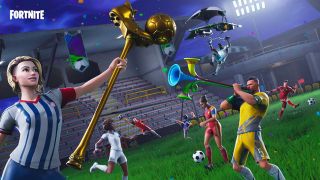 What gets your pulses racing? Fortnite? The World Cup? New iPhones for 2018? Smartwatches? Screen-to-body ratios? No matter what your interests, we've got something of note for you in today's tech news, courtesy of our friends at TechRadar.

Screen-to-body ratio measures how thin a phone's bezels are – how much of the front of a device is taken up by the display – and with a screen-to-body ratio of 91.24%, the current leader is the Vivo Nex. It might not hold top billing for long though, as Oppo just announced its Find X is going to offer a ratio of 93.8% when it launches tomorrow.

2. More info leaks out about the 2018 iPhone range

We should have some new iPhones to gawp at in three months' time, and now the leaks are coming thick and fast. The latest piece of gossip, from news sources in Asia, say we're getting three iPhones – a 5.8-inch OLED model, a 6.1-inch LCD model, and a 6.5-inch OLED model – and that the cheapest option, the LCD phone, is expected to be the big seller.

After its acquisition of Pebble, Fitbit is shutting down a lot of the functionality on Pebble smartwatches from the end of the month – but an unofficial service has stepped in to save the day. Rebble is promising to keep the lights on in regards to the Pebble app store, smartwatch firmware updates and mobile apps, and you can sign up to switch over now.

4. Gmail will solve your notification overload problems with AI

Google has announced a new smart system for managing Gmail notifications on mobile: it's going to use some artificial intelligence magic to recognise which messages are most important, and only push alerts through for those ones. The new feature is available for the Gmail app for iOS now, with the same update rolling out to Android users soon.

5. Fortnite has new treats for the World Cup

If you're one of the millions of people currently obsessed with Fortnite, you can take advantage of some new in-game treats released by Epic Games, intended to celebrate the occasion of the World Cup currently happening in Russia. You've got a new stadium location, new goal challenges, new football kit costumes and more to play around with.