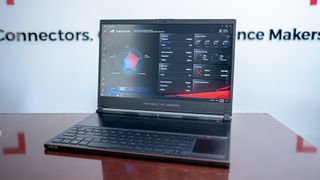 There's plenty of top-quality tech talk to get through today, including new phones and a new Chrome feature from Google, the world's thinnest gaming laptop (apparently), and the latest updates from the world of virtual reality, all courtesy of our friends at TechRadar.

We're expecting Google to take the wrappers off some new phones in October, and another leaked image supposedly showing the Pixel 3 XL handset just hit the web. It would appear we're looking at a 6.2-inch screen and quite a chunky notch, though from this picture alone we don't get any hints about what internal components it might have.

2. Samsung is making another VR headset for Windows

Thanks to documents filed with the Federal Communications Commission (FCC) in the US, we now know that Samsung is working on another VR headset you can use with Windows, following the lead of the Samsung HMD Odyssey. The 1440 x 1600 pixel resolution and 110-degree field of view listed in the leaked specs match up with the previous headset.

3. The HTC Viveport VR store is heading to the Oculus Rift

Seems like the biggest players in virtual reality are ready to start playing nicely, because HTC just announced that its Viveport VR store – and the associated membership plan – is going to hit the Oculus Rift on the 4th of September. While many games are already available on the Vive and the Rift, it should mean even more choice for VR enthusiasts.

Meet the Asus ROG Zephyrus S, which – according to Asus – is the "world's thinnest" gaming laptop (though it really depends on your definition of gaming laptop). Together with some top-end specs and colorful looks, the laptop measures a mere 14.95mm at its thinnest point, though it'll still take up a substantial amount of room on your desk.

5. Google is on a mission to speed up your web browsing

Everyone wants quicker web browsing, and Google is determined to supply it, with a new "lazy loading" feature in its Chrome browser. Lazy loading means that page elements aren't loaded until they're in view on screen, which should hopefully cut down the wait between typing in a website address and seeing the website itself actually show up.