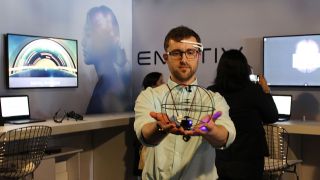 Courtesy of our friends at TechRadar, we've picked out some of the most interesting and important tech stories of the day: we've got news on upcoming iPads and iPhones, more details on tomorrow's big Huawei launch, a cool drone demo and a Google Home upgrade.

Huawei has a big press event scheduled for tomorrow, and we're expecting to see the P20 Lite, the P20, and the P20 Pro – set to be three of the most important phones of 2018. If you like surprises, look away now, because over the last few months just about everything you could want to know about these phones has leaked online. Another batch of specs has been revealed today, so there's not much left for Huawei to surprise us with tomorrow.

2. Your smart speaker is getting smarter

The smart speakers inside our homes continue to get more and more intelligent thanks to software updates rolled out by their makers. The latest model to get some extra functionality is the Google Home, which will soon support custom routines, letting you combine several commands together (so turning off the lights and locking the door at the same time). This isn't yet official, but the necessary code has been spotted by users.

3. A new iPad could be arriving soon

If you're a fan of Apple's tablets, you're in luck – a new 9.7-inch iPad is tipped to go on sale within the next few months, according to insider sources. There won't be anything too innovative or new on the tablet, but it will be smaller than the iPad Pro models, and it will cost less (maybe around the current £339 price). The rumour mill is suggesting that this entry-level iPad will finally get support for the Apple Pencil, so that's one reason to buy it.

4. Drones can be controlled by brain power now

Science fiction meets science fact: the latest drones can actually be controlled using your mind, with the help of an EEG (electroencephalogram) headset and some clever software. The system can recognise a certain pattern of brain activity, sparked off by the thought of your choice, and that pattern can then be associated with lifting the drone or bringing it back to earth. The tech is still in its infancy, but it points to the drone controls of the future.

It seems like anyone who's anyone in the mobile world is working on a foldable phone right now, and the latest rumours suggest Apple's own foldable iPhone is going to hit the market in 2020. That's based on a tip by a Wall Street analyst, and it's said to be facing competition from Samsung, Huawei, Sony, LG and others. You'll get double the screen space, but it'll still fold up and go in your pocket – welcome to the next decade of phones.