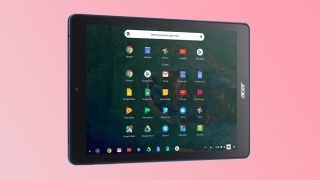 From the latest and greatest smartwatches to hit the market, to a brand new tablet from Google and Acer, there's plenty of tech news to chew through today, courtesy of our friends at TechRadar. We've got smartphone leaks and Twitch news for you as well.

Today's the day when we get our first official look at the P20 Lite, the P20 and the P20 Pro from Huawei, but of course we've seen a pile of leaks flood on to the web over the last few months. One final rumour out today concerns the potential for a notch on the front display: it sounds like you'll be able to show or hide the notch through a setting in the software, depending on your personal preference and what's being shown on screen.

It looks like Android tablets are all but dead, because Google and Acer have unveiled the very first Chrome OS tablet, the Acer Chromebook Tab 10. Considering Chrome OS works well on touchscreens and with styluses now (and the Tab 10 comes with a pen), and that Chrome OS can run Android apps too, this feels like the future – though this particular tablet is going to be aimed at the education market, costing $329 (about £230, AU$425).

3. We're getting closer to seeing the Moto G6

Speaking of flagship phone launches for 2018, as we were just a few moments ago, the Moto G6 has again broken cover with freshly leaked images hitting the web today. Based on these pictures we're in line for a very sleek and stylish phone, with a dual-lens camera and curved glass on the back. We'll have to wait and see whether it's enough to claw out some market share for Lenovo – the phone is expected to launch in the next month or so.

4. Your Twitch console app is getting an overhaul

Good news for anyone using Twitch on a console, because the PS4 app just got a major overhaul, while an Xbox One update is imminent as well. The app now looks better and is easier to use, while still giving you all the streaming functionality you need – you can preview muted game streams with the Twitch 1.21 update, for example, and find the search and settings buttons more easily. The Xbox One update is still "coming soon".

If you're in the market for a new smartwatch then you'll want to check out all the new models coming out of Baselworld 2018, the biggest trade show of the year for anyone interested in timepieces. TechRadar has a comprehensive rundown of all the best smartwatches that were on show at the event, so you can pick out the model that's right for you. Be warned though, because some of these wearables are very, very expensive.