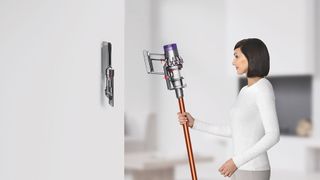 Our friends over at TechRadar spend most of their days hunting down the latest breaking tech news and rumours, and once every 24 hours we pick out the very best of those stories for our own roundup – today we've got vacuum cleaners, self-driving trucks and more.

Behold the Dyson Cyclone V10: the latest and greatest vacuum cleaner from the company, promising better suction and longer battery life than ever before. The new product marks something of a shift in strategy as well – Dyson says that cordless tech has now developed to the extent that all its vacuum cleaners will be wireless going forward, so at least you won't have to worry about tripping up over wires the next time you clean the living room.

2. Uber's self-driving trucks have been hitting the highway

The self-driving vehicle revolution continues apace, and the latest developments come from Uber Freight, which has revealed it's been putting its self-driving trucks into use on the freeways of the US. Regular, human-driven trucks are used to transport packages to and from depots, with autonomous alternatives doing the long haul in between (check out the video). It'll still be a while before these trucks get on regular roads and byways though.

Google Lens is like added smarts for your camera, and it's now rolling out across any Android device with Google Photos installed (iOS support is coming soon). What it does is recognise what you're taking a picture of and take appropriate action – so it might bring up product details for a barcode, or display details of celebrities or landmarks when you take a photo with them in the frame. Some augmented reality magic is being added as well.

4. Meet the smartwatch that can help you speak nine languages

Off on holiday? Consider taking the new Time2Translate smartwatch with you, which promises to translate in real-time between nine different languages – just speak at your wrist to get the translation read back to you. English, Japanese, French, Chinese, Italian, Spanish, German, Portuguese and Arabic are the languages supported, and the company behind the device is promising an accuracy rate of 85 percent, which should get you by.

5. And here are the latest leaks on the HTC U12

It's a close call between the Huawei P20 and the HTC U12 when it comes to the number of leaks and rumours we're getting about these upcoming flagship phones, but today we want to report on the HTC handset. The latest whispers from a "trusted source" suggest that the phone will have a curved glass back and a metal frame, with a fingerprint scanner on the rear. A dual-lens camera on the back and multiple colour options are also likely.