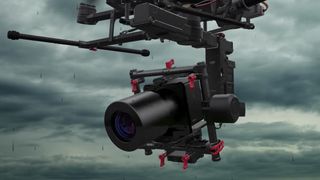 We've collected up the five best news stories in tech for you today, courtesy of our friends at TechRadar – there's news on two major flagship phones still to launch in 2018, a drone you'll love but probably can't afford, and updates for the smartwatch on your wrist.

1. The Galaxy Note 9 could introduce an in-screen fingerprint sensor

Since smartphones started banishing bezels on the front of devices, the fingerprint sensor has typically been shunted to the rear, but the rumour is that the Samsung Galaxy Note 9 will be the first flagship phone to fit the sensor under the glass on the front of a phone. We've just got eyes on a patent that shows how Samsung might be planning to pull off the trick – by using the light-emitting properties of the display to find and scan your finger.

2. Google's Wear OS is getting smarter

The rebranded Android Wear software now known as Wear OS is getting smarter, thanks to news of an improved version of Google Assistant coming to wrist-based devices. The new update rolling out to smartwatches enables the Assistant to make smart suggestions about what you might need to know, and turns on voice feedback as well. You can expect plenty more related news next week, as Google hosts its annual developer conference.

Now that the LG G7 ThinQ has been officially unveiled, the tipsters of the web are turning their attentions to the next flagship phone from the company, the LG V35. Due out sometime later this year, the phone promises to be LG's best yet, and there are two new images supposedly showing the handset for you to gawp at – you can see the large screen, the dual-lens rear camera, and the distinct lack of a notch at the top of the front display.

Hungry for some new Sonos hardware? The wireless music speaker specialist has just announced a press event for 6 June, with something new to show off – they don't say exactly what that something new is, but most of the rumours point to an updated soundbar with Alexa built in. In other words, you'll be able to tell Alexa to change the channel for you, while enjoying all the superior audio fidelity of a Sonos speaker.

5. This drone blows everything else away for aerial photography

If you're really serious about capturing some great photos and videos from the air, then you need to consider the new PhaseOne iXM 100MP, yours for a mere  $40,000 (getting on for £30,000). Even if you can't afford it, it's worth marvelling at – the drone brings with it a 100-megapixel sensor, an ISO range of 50-6400, and a dynamic range of 83dB. What's more, it's weatherproof and can operate in temperatures all the way down to -10°C.