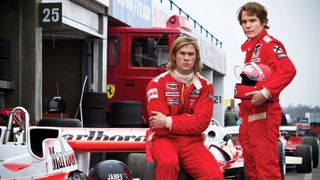 The theme of sport makes a great grounding for movies that provide audiences with stories that are often as funny as they are sad, triumphant as they are harrowing and as serious as they are lighthearted. The story often follows the protagonist along a journey that combines overcoming physical or mental obstacles with self-discovery or self-clarification, leaving audiences with a sense of fulfilment, empowerment and even pity by the time the end credits roll.

Boxing and wrestling themes make great foundations for movies that see the main character use the physicalities of the sport to battle with, or overcome, internal demons. Both Raging Bull and The Wrestler do this, despite the biographical story of one and the fictional story of the other.

Baseball and F1 have both become popular channels for portraying life journeys through sport, with the likes of Rush and 42 following the career rivalry of two F1 drivers and a black baseball player in 1940s America respectively.

There are so many sporting movies out there that deserve a place on our top 10 list, so we’ve combined our favourites to give you what we think are the best of the best. From Raging Bull at the top to household favourite, Rocky, at the bottom, these movies won’t fail to take you on a journey… all from the comfort of your sofa on a lazy weekend afternoon.

A controversial film at the time of release, this film has earned unprecedented appreciation over the years to become one of the most popular sporting films of all time

Shot in black and white, this autobiographical film takes you on a journey through the life of boxer, Jake LaMotta, as he battles with jealousy and anger and eventually compromises his career and relationships with his irrational behaviour. Jake LaMotta is played by Robert De Niro who wins an Oscar for his portrayal of the boxer, with the film as a whole earning eight Oscar nominations and winning two of them. Scorsese was dubious about directing this film, but later, many critics called this film one of the pinnacles of his career.

Commended by critics for its fight scenes, cinematography and music, this film certainly deserves a watch

A mixed martial arts film that features two brothers who use the sport to tackle and resolve both family and internal battles, Warrior has a deeper, more emotive layer to it that puts it above similar films within the genre. With sibling rivalry, forgiveness and redemption all additional themes buried within the plot, some critics state that it’s one of the only sporting movies of this type where the audience don’t want either opponent to lose.

Not to be confused with Clash of the Titans, this box office hit tackles racism in an American Football high school league

If you like a triumphant story of the underdogs overcoming prejudices to take the win, this film will certainly lift your spirits. It tackles some pretty serious topics, including racism in 1970s America and asks characters to reconsider what they perceive to be right or wrong in the eyes of society. Loosely based on a true story, critics generally gave the film positive reviews, although in so many ways, they say that its exploration of the themes don’t run as deep as they could. If you’re looking for a light film with meaning, this could be a contender.

Despite his failed attempts to build a relationship with his daughter and forge one with his love interest, Randy’s passion for wrestling prevails, despite a heart attack forcing him into retirement. Seeking solitude in the ring and with his fan base, Randy’s passion eventually becomes his downfall. The film was praised by both critics and the wrestling world alike, giving it fantastic credibility that reforged Mickey Rourke’s acting career.

While the truth has been bent slightly to make the story accessible to the big screen, there’s no doubt that the rivalry between James Hunt and Niki Lauda, although exaggerated, makes a great angle to showcase the lives of two of the world’s best racing drivers. Winning two awards for editing, critics commend the way in which the film blends F1 racing scenes with strong acting performances, while Niki Lauda himself commented on the fact that it had been overproduced, keeping to the essence of the storyline.

This film brings segregation to the forefront through the biography of baseball player, Jackie Robinson

If you’re looking for a film that will make you feel good by the time the credits roll, 42 could be it. As the first black major league baseball player, Jackie Robinson breaks down barriers when it comes to desegregation in major league baseball. Serious matters are addressed, yet the narrative still remains triumphant in the sense that Jackie overcomes a racially abusive society to excel at his game. With the writers collaborating with Jackie’s widow to ensure the authenticity of the film, viewers receive an as true as can be representation of this pinnacle moment in history.

Featuring cocaine abuse, prison sentences and testing of loyalty, this is a fairly heavy film about the family affairs surrounding Mickey Ward’s journey to becoming a successful boxer. In a way, it is film that shows what can happen if you overcome your demons and regain your faith in people. The story, and the performance of both Mark Whalberg and Christian Bale, earned the film plenty of recognition, with Bale winning many of the awards he was nominated for.

Featuring archive racing footage and home video clips, this documentary film is very different to the biographical numbers that we’ve already featured in the list. Working with Senna’s family, the filmmakers have captured the true essence of Senna’s racing years leading up to his death, including his rivalry with F1 driver Alain Prost and commitment to improving the safety of the sport; with critics commending the fact the the film offers the viewers heart-pounding thrills and full emotional involvement.

If you love a story where the underdogs beat the bad guys, then Miracle could be your best bet. It showcases the story that sees the USA Ice Hockey team beat firm favourites, The Soviet Union, to become the 1980 Winter Olympics Ice Hockey champions. It focuses in on the efforts of Coach Herb Brooks as he mentors the team in the height of the Cold War, and follows the lessons and changes the team go through to become successful. It’s a great choice if you’re not looking for a film that’s not too deep.

One of the most popular sporting films of all time; this rags to riches story won three Oscars and countless other critical acclaims

Winning three Oscars, including best picture, Rocky has become a household classic and famously earned a return of 11,000% at the box office. It follows Rocky’s journey from a failed boxer to training to compete in the fight of his life, with a love story between him and Adrian Pennino as a side plot. Everything comes together at the end, and the film also spawned 6 sequels and several video games, amounting to its enormous commercial success.

Why not also check out our list of the best sporting biographies for a good read on some of the biggest names in sport.