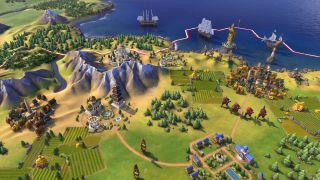 Strategy games usually involve building something, whether it’s a themepark, an army or an an entire civilisation. And anyone who buys a strategy game knows they’re in it for the long haul; from our experience, you buy the right one and it’ll be your go-to game for months. But what are the best strategy games out there? Read on.

For the most part, strategy games are separated into two brackets; simulation and war games. If you like the idea of a game simulating real life decisions, like that of a prison, why not give Prison Architect a go? If you’re looking to take your decision making skills to the battlefield,  XCOM 2 is a sure fire way to activate your inner alien battlefield warrior.

Of course, you’ll need to consider the console you’re looking to play on. Some games are compatible with iOS and Android, some are just for Xbox or PS, while others are built for Windows and PC gaming. And if you’re planning to get your mates involved too, make sure you’re investing in a multiplayer one strategy game.

Build and expand your own empire through combat, exploration and competing with your friends

With reviewers remarking on the improvement of game play over Civilization VI, users can expect excellent graphics, interactions that evolve throughout the game, units that can combine to form Corps, while multiplayer mode enables you to compete with your friends in single session gaming. Following the development of your civilisation as it faces some of history’s greatest leaders, Civilisation VI, blends accuracy with fantasy to make a rather addictive concept.

Whether you’re using your engineers to rebuild the Avenger, an alien supply craft, into your ideal war machine or creating an army of specifically designed soldiers to carry out your plan, XCOM requires patience, tactics and plenty of your time. There’s loads of map to explore, with alien infested wildlands and megacities to eventually take control over. If your mates are round, you can also engage in mix and match head to heads; humans vs aliens for the ultimate battle.

Having scored an aggregated score of 93% from Metacritic, StarCraft II is, in the eyes of the critics, certainly worth a go. As a Terran, your campaign will be in real time, and the strategy part of the game comes from specialising units, and using tactics and mobility to win wars against other Terrans (civil wars) and battles with the other species, the Protoss and the Zerg. This one features better graphics than its 1998 counterpart and with its map making and scripting tools, you can personalise the gameplay experience.

Simple graphics, yet highly addictive, you’ll be on lock down in your own lounge with this cool game

$49.99
View at Amazon
Full campaign mode
Share your prison with the online community

This is probably one of those strategy games that has you hooked from the start. As you recruit more staff, you unlock more features until you have a full prison with cells, hospitals, libraries, canteens and so on. You have to manage the inmates at the same time, though. A riot could be just around the corner, you’ll need to make sure that the prison’s finances are afloat and you’ll be in charge of the reform programmes to prevent prisoners from reoffending. The people behind this game have thought of everything, providing you with hours of immersive entertainment.

A fun, in many ways retro, simulation game that’ll provide hours of amusement

Parents, this may be a game that you remember playing when you were younger. Only you probably had more fun sending visitors on multiple loops round the track and watching them hilariously throw up on the pavement, rather than building your own mega theme park.  Whether it’s a gift idea or something you’re curious about revisiting, there’s no doubt that RollerCoaster Tycoon is one of the best simulation strategy games; whether you’re building rides, or recruiting staff to run your theme park.

Whether you’re extracting resources, manufacturing elements or simply racing to earn enough money to beat your competitors, Offworld Trading Company is a tense strategy game that promises hours of entertainment. You’ll win once you have a majority finger in all the pies, and with multiplayer supporting up to 7 other people, you don’t have to stop playing when your mates come round either.

Want something a bit more fast-paced, check out the best racing games for a bit more action