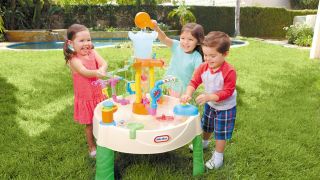 Remember when you used to gladly give up your meal times to make your own mud pies in the back garden, or when your friends used to come round and you’d play havoc in the sandpit? What we got up to as kids can seem so far removed from the childhoods of some of today's children, so it’s time we re-introduced the awesome toys that inspired hours of imaginative play (and some new ones, too), and get them outside in the fresh air having fun.

As a loose rule, outdoor kids’ toys are targeted towards different age ranges. Play centres, or climbing frames, with their slides, swings and clambering equipment, are usually suitable for those three years and up, while playhouses usually inspire imaginative play, and are perfect for toddlers through to ten year olds…or whenever they suddenly decide that they’re way too cool to play in a wendy house.

Some outdoor kids’ toys are great for unleashing pent up energy. Trampolines are always a popular option, so long as you have a level garden and you’re totally cool with the potential that they’re gonna end up getting hurt at some point (when do kids ever stick to the seat-drop only rule?). Tools to get them running around are good, too. How about a Nerf Super Soaker? – a great way to get them outside during those few weeks of the year that Britain seems to have a summer.

So, whether you’re looking for a present idea that isn’t screen related, or you’re simply fed up of them causing chaos around the house, we’ve come up with a list of the best outdoor kids’ toys to get them out in the garden… and give you five minutes of peace and quiet.

Swings, slides and lookout towers – what will it be? A princess castle or a pirate ship?

Providing you have the space, this play centre has the potential to inspire hours and hours of play, whether they’re making full use of the swings and slides, making up games about pirates and princesses in the tower or creating a den in the play tent. With a tall tower for the older children, and a little one for the littlees, you know you’re sorted when the family descend or your friends and their offspring come round for a playdate.

No driving test required to cruise around in this thing

Best for: Electronic outside toy | Suitable for: 3 years plus

With a top speed of 2.5km, it’s highly unlikely they’ll be caught speeding, and while it doesn’t have a brake, they only need to take their foot off the pedal for the car to come to a standstill. Aside from that, the car is packed with realistic features, including a detailed dashboard, air-conditioning and an MP3 player so they can listen to their favourite tunes while cruising around the back garden. It’s a pretty cool toy, so be warned that taking turns could be an issue.

A cool alternative to our top pick

Best for: Climbing | Suitable for: 3 years plus

This wooden play centre is much cheaper than our first pick, but still has heaps of potential to become whatever their imaginations want it to be. With 3 climbing walls, they’ll be able to wear themselves out while developing muscle strength and they can create their own den in the playtent underneath the slide. As an alternative to our top pick, it also takes up less space, making it much more realistic for the average garden.

Educational, and a field day for the imagination

Best for: Educational | Suitable for: 2 years plus

Teaching kids about the impact humans have on the environment is much more important these days than it was back when we were little. This little playhouse packs a lot of interactive imaginative features, including a recycling centre and a garden. They can grow their own miniature flowerbed, and tend to it using the water they collect in their own mini water butt. When they’re not learning about the environment, it can become a fantastic place to play, although there isn’t too much space inside if they have their friends round.

Remember that little red car you used to scoot around in?

Prime
$114.90
View at Amazon
See all prices (2 found)
435 Amazon customer reviews
☆☆☆☆☆
Use with or without protective floor
Pull along or scoot themselves
Age range is pretty narrow

The little red car has had an upgrade with this princess carriage. With its gloriously pink design and realistic trotting noises, it’s enough to inspire the imagination of princesses across the land! Whether they’re being pulled along by you or scooting along themselves, this is a great little toy for venturing around the back garden and beyond.. And there’s even a little boot where they can store their magic wand.

A wondrously safe, but awesomely cool trampoline for hours of outside play

With the amount of safety features this trampoline has, you can get on with doing the chores while the kids are kept busy outside – just bear in mind that there should only be one child on the trampoline at a time! The external springs are even covered so you don’t need to worry about trapped fingers. Whether they’re practicing their seat drops or they’re attempting to flip while you grit your teeth, this trampoline is sure to inspire hours of outdoor fun.

Forget a paddling pool… it’s all about the water slide

Best for: Warm, sunny days | Suitable for: 3 plus years

As soon as they get wind that you’re stashing this cool slide, your garden will be the first place the kids of the neighbourhood head to on a warm, sunny day. With a climbing wall, slide and water sprayer, it’ll create hours of fun, and it’s fully aided by a fan that delivers constant airflow, so don’t worry about getting the foot pump out every five minutes. The only thing you’ll need to worry about is refreshing the muddy foot water every now and then.

Best for: Calm entertainment | Suitable for: 18 months plus

This triple whammy table provides a place where they can sit and eat outside when the sun is out. Once they’ve eaten their sandwiches, you can remove the centre panel to reveal a sandpit and a water trough. While there’s no doubt that half the sandpit will end up in the water trough, and the bench will become covered in damp sand, it’ll provide hours of calm entertainment for when you’re busy catching up with stuff inside in the house.

Keep them fascinated for hours with this cause and effect factory

Best for: Sensory play | Suitable for: 18 years plus

$77.37
View at Amazon
See all prices (2 found)
928 Amazon customer reviews
☆☆☆☆☆
Learn cause and effect
Plumbing pipes can be rearranged
Things could wet unintentionally

This water table will provide hours of discovery and fascination. The kids can play around with the plumbing and cause a host of action, whether it’s spinning a propeller, pooling water into a cup, trying to make the little boat sink or making things rattle. With interchangeable pipes, there’s plenty of scope for you, or for them, to invent their own plumbing systems, just bear in mind that they may get unintentionally wet!

Best for: Battling | Suitable for: 7 years plus

That thing that you think you may have left in the garage may have to wait once the kids are outside battling with this Nerf water gun. With a 2 litre tank, there’s plenty of ammo to keep them going before they risk heading back to the tap, and with the ability to shoot water up to 38ft away, there’s full scope for an extensive neighbourhood battle. If there’s siblings involved be prepared to buy one for each of them, because these guns are probably hard to beat.