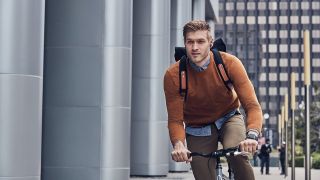 See any film that falls across Christmas/Valentine’s Day/a birthday/an anniversary (delete as appropriate) and we can pretty much guarantee there’ll be a bumbling but well-meaning male lead tearing his hair out over what to get his lady love. You’d think then, given all the airtime devoted to this particular problem, that men are super duper easy to buy for in comparison, right? Wrong. The best gifts for men are actually pretty tricky to hunt down.

That’s why we’ve compiled our list of the top gifts for guys; our round up from across the shops right now with something to suit near enough any kind of guy. Gym-goer? Yep. Petrolhead? Check. Lego nut? Duh. Musician type? The list goes on. Whether you’re shopping for a lover, a brother, a Dad, a friend, or - gulp - a father-in-law, you should be near enough covered.

Some, like fragrance or a thrilling supercar-driving experience, are pure indulgence - because why not? It is, after all, their day to be spoilt. Other gifts are tailored to meet their interests in a way they wouldn’t ordinarily splash out on themselves, like in the form of an awesome Lego set that lets them recreate one of their favourite films. Some show you’ve been listening by attending to rather more practical needs: enter, the home assistant hub to cater to their every whim and the fitness band that keeps them on track. And then some… well, some are for you to enjoy too. Romantic rooftop dinner, anyone?

Despite being relatively new to the game, at least compared to old hands like Creed and Acqua di Parma, the house of Tom Ford has quickly earned a name for itself as a purveyor or the finest and best men’s fragrances, so where better to pick him up a luxurious little something for a birthday or anniversary? Described by reviewers overwhelmingly as “distinctive”, it’s a masculine fragrance full of sparkling citrus and ginger, with herbaceous basil and oakmoss for a hit of fresh green notes, devoid of any of the characterless synthetic notes some men’s fragrances can rely on. Users have found that the sillage is merely polite, so it won’t project that far, but really that just means you get to enjoy it for yourself.

When daily driving is more along the lines of a traffic-laden commute or rushed school run, it can be easy to forget how joyful it can be — and while opportunities to go nuts behind the wheel are sadly, but necessarily few and far between, you can capture a little of that magic for them with a Supercar Driving Experience from Red Letter Days. The most thrilling experience this side of the Autobahn, this day gives them the chance to hit the circuit in their choice of Lamborghini, Ferrari, Aston Martin, Porsche, Audi R8, or Nissan GT-R, so whatever their most lusted-after vehicle, they’re sure to find one that hits the spot.

Punch it, Chewie! Kick their birthday gifting into hyperdrive with this enormous Lego set

$409.99
View at Amazon
565 Amazon customer reviews
☆☆☆☆☆
Amazing for LEGO and Star Wars fans
Get an activity out of it too
You’ll find the bricks everywhere

All kids, no matter their age, love Lego, and that goes for the grown-up kids too. If you know a bloke who’s a brick fanatic or has a thing for Star Wars — come on guys, admit it, it’s always both — we’ve got his next present licked, assuming he hasn’t already snapped it up for himself and is building it as we speak. This Lego Millennium Falcon set allows fans to build their own version of the fastest heap of junk in the galaxy, complete with rotating laser cannons and an opening hull where they can play out the action with a cast of six included minifigures.

The latest in a now reasonably long lineage of Fitbit activity trackers, the Fitbit Ionic is one high-tech way to surprise your favourite gym-going gentleman. It’s a little more than he’d probably spend on himself, making it a good one for Dads or other halves who deserve a treat and are looking to up their fitness game. It builds on the success of its predecessors with a full colour screen that makes it look more like a smartwatch, and bonuses like personalised workouts and multi-sport tracking, so no matter what their favourite activity, you can help them achieve their goals - the best gift of all!

Shape stubble and roll with this quick-charging trimmer and shaver

No price information
Check Amazon
20 choices of length
Shape, trim and shave
Vertical blade takes some getting used to

If you know a guy who likes to keep his artfully honed facial hair in perfect shape, or just likes to do a little bit of manscaping every now and then, help him up his beauty tech game with the Panasonic i-Shaper. It’s a 3-in-1 styler, trimmer and shaver that can be used both corded and cordless for grooming on the go or at home. Pretty standard stuff these days in the world of men’s grooming, but the real magic is that they have a choice of 20 different lengths, offering an unparalleled level of customisability — we didn’t even know there could be 20 different lengths of beard.

A compact tech solution with a whole lot of big functionality

This sleek little pebble, the Google Home Mini, is that rare thing: a home gift that you can guarantee won’t get in the way or under their feet. This makes the perfect companion for the music or movie lover who already has Chromecast, as they can ask Google Home Assistant (very nicely) to stream tunes or films to the TV. Equally, they can use it to control smart home appliances and devices with their voice. Basically, you’re giving them the gift of the future, and who doesn’t want that? The ideal splash-out gift for the technically-minded.

Burgers, ribs and beer-basted wings, these are a few of our favourite things

Go beyond the pub favourites of beer-battered cod and steak and ale pie and discover a brave new world of beer-based cuisine, with this book as your passport. While it’s obviously not just for the boys (women can chuck around the word “hoppy” too, you know), it’s pretty safe to assume that there’s a man in most people’s lives who’s happiest with a pint in his hand, and that he probably likes eating too. Featuring 75 delectable recipes, some of them downright outrageous (see: The Ultimate Beer Burger with beer onions, beer ketchup, beer-caramelised bacon, beer brioche buns and beer cheese sauce), this offbeat cookbook is just the thing to shake up weekday dinners.

A glamorous date night for two in the city

Look for a night out in London, and you’ll be met with a bewildering array of options, and an equally bewildering level of expense, but this romantic evening for two in the Big Smoke comes readymade from the clever little elves at Red Letter Days, who know a thing or two about experiences. At an atmospheric rooftop bar in Waterloo, you’ll be treated to a seven-course tapas feast, plus a cocktail each of your choice, as you look out over one of the most iconic skylines in the world. For added romance, why not introduce a game of building bingo? Whoever spots the BT Tower first gets the last bit of Manchego...

Looks good, sounds good, but sadly doesn’t go up to 11

The music-obsessed man has got to be able to get hold of his tunes on the go, too, but if he’s more analogue than iTunes in his tastes, you might have a hard time convincing him to sacrifice aesthetics for modern convenience. Luckily, there’s no need for that, because this Marshall Stockwell speaker has all the functionality of a high-tech portable Bluetooth speaker with all the good looks of the world’s most iconic amplifier. Play music through Aux or USB, and rock out for as much of the up-to-25-hour battery life as you can handle. Yeeeeahhhhh!

If you are shopping for a guy who really invests time in their daily skincare routine, check out our guide to the best grooming products for men.

If you are on the hunt for a gadget-loving, tech-obsessed guy, head over to our colleagues at T3.com and check out their best gifts for him.