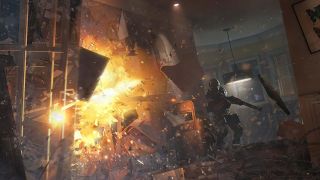 Doom, Duke Nukem, Wolfenstein 3D – the list of beloved first-person shooters goes on and on, but in the many years since we first learned to handle a controller, plenty has come along to contend their place in the pantheon of classic games. The best FPS games these days are better-looking, smoother-playing and more expansive than ever, and while no-one ever forgets their first time facing down mecha-Hitler, there’s so much more to discover in the best games of the past few years.

If we had to choose, our all-round best first-person shooter would be Overwatch. If you’ve been living under a rock since 2016, that’s the all-guns-blazing objective-based shooter that’s joyfully co-operative, with gameplay that’s both welcoming to inexperienced players and rewarding of skilful play.

What’s a first-person shooter without friends? Overwatch sees you put together a ragtag bunch of multi-talented misfits to complete objectives, whether it’s the complex, capable AI giving you backup or your real-life posse lending a hand over multiplayer. Rather than simply button-mashing and wreaking havoc on the avatars that get in your way, it makes you think about how each member of your team fits in to the action, and while skilled play means you can win big (and gloat over that gravity-defying move you just pulled in replay) it’s altogether a very accessible option, no frustratingly steep learning curve in sight, making it great fun for all ages.

The story, the action, the graphics: whatever you’re looking for, Destiny 2 is it

No matter what kind of game you’re looking for, it’s likely Destiny 2 is right up your street. How can we be so sure? Well, it’s basically everything you could want in a first-person shooter: good-looking graphics, smooth gameplay, a story that hooks you in with hints of RPG, and a super-addictive multiplayer mode. But it’s not all about the team play. In fact, a big part of this sequel’s appeal is its strong campaign, a huge improvement on the original’s, which reviewers found somewhat lacking, while antsy players who don’t want to sink hours into a linear story mode will love the huge number and array of side activities.

Still one of the best FPS games of all time

Of all the first-person shooter games that could reasonably be subtitled “alien trouble” (and there are a lot) Half Life 2 has to be one of the best. While even this hotly-anticipated sequel is now old enough to have achieved the classic status of its predecessor, it still stands up to several replays. It’s just as suspenseful as the original Half Life, but more responsive, realistic and detailed than ever, as evident in everything from the behaviours of your enemies to the impact your avatar, crowbar-wielding scientist Gordon Freeman, has on his environment. Oh, and you can launch toilets at your enemies. Sold.

Where man meets machine, the smoothest ever shooter is born

£3.95
View at The Game Collection
£6.95
View at Amazon
£9.99
View at CDKeys
See all prices (18 found)
364 Amazon customer reviews
☆☆☆☆☆
The smoothest combat mechanics ever
Great story in between the action

Between space dinosaurs and the ability to jump between realities in combat, Titanfall 2 is far from your typical shooter. It’s not as silly as it sounds though. In fact, we’d go so far as to say that it’s video game combat, perfected. With the smoothest mechanics of any game out there right now, even the most mundane moves are a treat to perform, although once you get used to the gravity-defying melee action, you’ll probably find it hard to stop yourself pulling off jetpack jumps at every available opportunity. And in the middle of all that action, there’s still room for a story, and for some surprisingly warm relationships to be forged between man and war machine.

Get that adrenaline pumping with this strategy-filled FPS

While there’s very little that’s Overwatch-esque about Rainbow Six Siege, the two games do have one thing in common: in both arenas, sound tactics can mean the difference between triumph and game over. In the short, adrenaline-fuelled rounds, every move counts, and whether you’re strategising in the main campaign or engaging in turbo-powered firefights in 5 v 5 multiplayer mode, you’re assured of a dynamic playing experience thanks to superbly reactive environments that respond realistically to your onslaughts. If you really like that nervous feeling that comes from playing an immersive, high-stakes tactical shooter, reviewers say you’ll love this.

Harrowing? Sure, but this First World War shooter is not to be missed

Intergalactic mecha soldiers and gorilla scientists are all very well and good, but if you’re after something a little less silly and a lot (a lot) more serious, Battlefield 1 is the one to look to for your FPS fix. An amazingly sensitive retelling of combat in the world’s most devastating conflict, this Great War-set shooter is sensory overload, with suitably overwhelming – but gorgeously realised – settings from a muddy, rat-infested No Man’s Land to intense dogfights seen from the cockpit of a bi-wing attack plane. There are also some great multiplayer modes to get your teeth into, from standard capture the flag games to War Pigeons mode.

Feel like a hot shot with this reality-altering indie FPS

Just when you thought there was no more room for improvement in the first-person shooters arena, PlayStation went and brought virtual reality into the equation. The result is Superhot, the only VR FPS on our list, and by all accounts a thoroughly awesome experience. With its blocky graphics and stark settings a far cry from the super-realism of some of the other games in our list, it has a uniquely unsettling atmosphere, and its gameplay is one of a kind, too. In Superhot, time is slowed down, giving the impression you’ve called in your spidey senses to be able to react superhumanly fast to threats and, in short, feel like a total badass.

Double-wielding and mecha Nazis? All par for the course in the Wolfenstein series.

For alternative history buffs, the Wolfenstein series is the gift that keeps on giving. While not unrelentingly grim, it is a little like a choose-your-own-ending book where none of the outcomes are good, and there are some challenging cutscenes that give the slightly time-worn “what if the Nazis won WWII” trope some new, unsettling life, as well as startlingly thoughtful details throughout that make the whole thing immersive. Elsewhere though, it’s unapologetic about being a straightforward, ultra-violent shooter. Want to kill some Nazis? Okay. Want to do it dual-armed with a laser rifle and a throwing knife? Be our guest.

For a fully immersive experience, check out the best gaming headsets